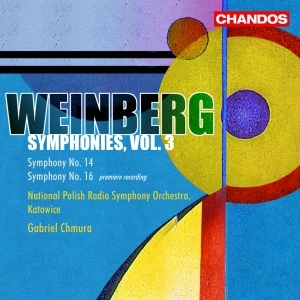 Symphony No. 16, Op. 131
Symphony No. 14, Op. 117
Weinberg was one of the most prolific and inventive creative musical figures of the twentieth century. The reason for the neglect of his music is largely political, for Weinberg, as a bourgeois Jew, suffered under both Nazism and Soviet Communism. It is only since the barriers between the Soviet Union and the West were lowered that scholars worldwide have come to realise the importance of Weinberg’s legacy.

The music of Mieczyslaw Weinberg is full of colour and rhythmic energy (Shostakovich was his most important influence and described Weinberg as ‘one of the most outstanding composers of the present day’), often slightly quirky in nature, and always inventive. Besides Shostakovich, other palpable influences on Weinberg’s music were Prokofiev, Stravinsky and especially Mahler. More of a romantic than his mentor, Weinberg composed music which is notable for the lyrical beauty of its melodies and its extraordinarily fine thematic development. Its neglect is due in large part to the circumstances of the composer’s life, rather than to its intrinsic quality, and it is therefore well suited to receiving the full Chandos treatment, which will bring it to the wider audience it deserves.

This third volume of Gabriel Chmura’s Weinberg cycle features two single-movement symphonies from the years of after Shostakovich’s death. Each one is out of the top drawer… Here [in the Fourteenth] and in the Sixteenth, the Polish orchestra do their conductor, themselves and Weinberg proud. An issue of considerable accomplishment and importance.

Gabriel Chmura and the Polish National Radio Orchestra revel in the Rhapsody’s many opportunities for virtuosity, and they deliver vibrant and committed accounts of the Symphony and Sinfonietta. Add to this equation Chandos’s customary state-of-the-art engineering, and you have a release that deserves the widest possible dissemination.

Sound quality is good, with excellent balance between the sections… In short, this is another fine addition to the slowly growing repertoire of Weinberg on CD, and oversight that should have been rectified, long ago.