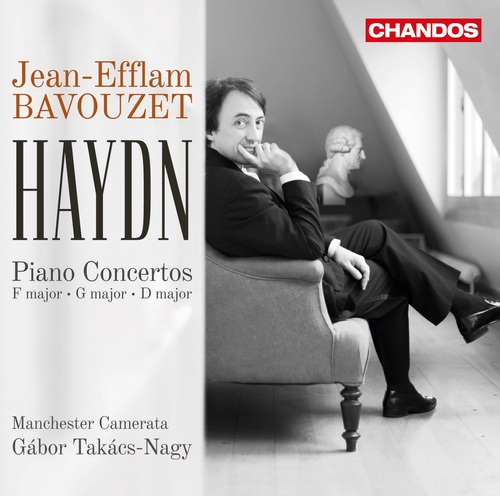 Jean-Efflam Bavouzet is recognised today as one of the world’s finest interpreters of Haydn’s piano works, International Piano describing him as ‘Haydn’s greatest contemporary keyboard exponent.’ In the first five volumes of his ongoing series devoted to Haydn’s sonatas he has been applauded for his intelligent musicianship, crisp technique, and sheer sense of joy in the music. In this concerto recording he performs in partnership with the conductor Gábor Takács-Nagy, the two united by an admiration for Haydn’s infectious good humour and art of the unexpected.

Of the twelve keyboard concertos carrying Haydn’s name, the third, fourth, and eleventh, recorded here, are the best known. The publication history of the rest casts doubt on their authenticity; many imitations were attributed to Haydn by publishers wanting to cash in on his wild popularity in Europe during his life.

The concertos in F and G major are early works, in an early style, simply constructed with graceful and clear keyboard writing. One finds plenty of Haydnesque charm and spirit in these scores, both of which also feature specially touching slow movements. By contrast, the Concerto in D major is a work of the composer’s maturity, full of strikingly dramatic contrasts and characteristic wit. The infectious Hungarian Rondo finale brings the concerto to a rousing conclusion and surely accounts for much of its enduring popularity.