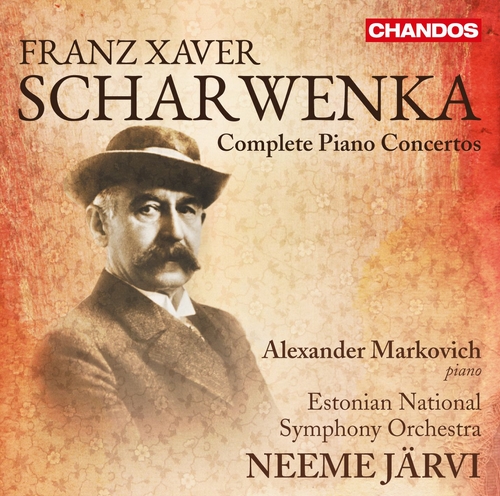 The Polish-born German composer Franz Xaver Scharwenka was a much lauded and beloved figure of late-nineteenth- and early-twentieth-century music. His four piano concertos are central works among his small output. With Neeme Järvi and the Estonian National Symphony Orchestra, Alexander Markovich has here recorded them together for the first time.

The Piano Concerto No. 1 was dedicated to Liszt and brought Scharwenka great renown. Originally conceived as a solo piano Fantasy, it was reworked as a piano concerto which in its content, despite a seemingly conventional three-movement structure, reflects its origin as a fantasia. The Second Piano Concerto seems to represent a step back stylistically, echoing the conservative style of Brahms. However, the influence of his native Poland can also be heard in allusions to Chopin as well as in Polish dance elements in the finale. The Third Concerto, in C sharp minor, opens with impressively powerful music reflective of this key signature, but in its highly romantic way it also introduces delicate and lyrical passages. Perhaps the finest of the concertos, the Fourth was met with astonishing enthusiasm at its premiere in 1908. It is an enormously varied work, a quality typified in the ‘roller-coaster’ first movement which moves rapidly from one expressive world to another.