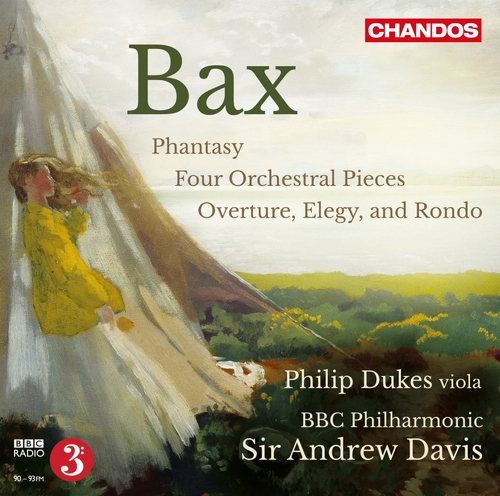 Born in 1883 into a wealthy family in London, Arnold Bax began a love affair with Ireland as a young man. He moved there in 1911 and his Four Orchestral Pieces from 1912 – 13 are deeply influenced by the landscape of the countryside near his Dublin home. The first three are better known in revised versions, from 1928, as Three Pieces for Small Orchestra. Here ‘The Dance of Wild Irravel’ joins the other three movements for the premiere recording of the four Pieces as Bax originally conceived and orchestrated them.

The Phantasy for Viola and Orchestra from 1920 was inspired by the strong feelings with which Bax responded to the Irish political turmoil at the time, underlined by his use of the Sinn Fein Marching Song (later the Irish national anthem) at its climax. Bax is celebrated for his melodic invention and this passionately lyrical score must be one of the finest examples of his gift. Here the soloist is Philip Dukes, described by The Times as ‘Great Britain’s most outstanding viola player’.

By 1927 Bax’s style was changing and the opening of the Overture, Elegy and Rondo is reminiscent of a classical concerto, suggesting a leaning towards then-fashionable neoclassicism. The long, dreamy melody of the middle section and brilliant, colourful orchestration, however, are unmistakable hallmarks of Bax’s individual voice. Also Available: Sir Andrew