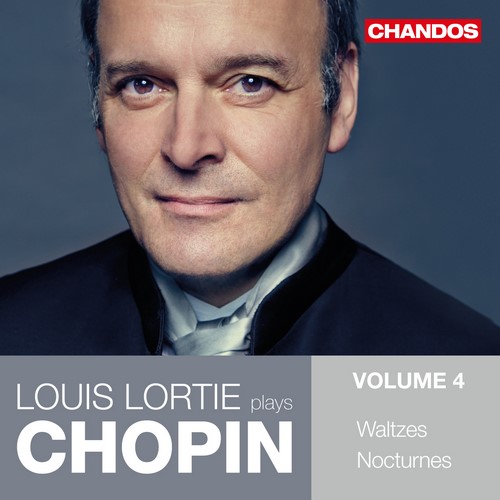 Nocturnes:
Op. 9 No. 1
Op. 32 No. 1
Op. 37 Nos 1, 2
C sharp minor, Op. post.
This is the fourth volume of Louis Lortie’s highly-successful series devoted to Chopin. The recording perfectly illustrates how Chopin elevated the waltz to a genre of musical art, from danses de salon – evocative of a genial milieu – to ‘works’ with proper opus numbers. Growing up in the 1820s, the composer at first viewed the waltz purely pragmatically, as a means to a social end in the dance salon. But after spending time in Vienna and Paris in the 1830s he decided that a waltz might be worthy of the deeper appreciation accorded a ‘work’.

From moods of liveliness, in introductory calls to the dance, to more poetical or sentimental sections, the affective achievement in these works is great, whether the mood captured is plaintive (the B minor, A flat major, or F minor ones), evocative of the dance salon (the E major), lilting (the D flat major), reminiscent of a Ländler (the A flat major, the only waltz Chopin composed in 3 / 8 meter), dramatic (the E minor), or brilliant (the G flat major).

The nocturnes also trace their origins to the salon. The genre derives from a type of vocal music, akin to the solo romance, but highly popular among amateurs as an opportunity for singing duets.

With this series, Louis Lortie has made his reputation as a ‘model Chopinist’ (BBC Music).
Recording: Potton Hall, Dunwich, Suffolk