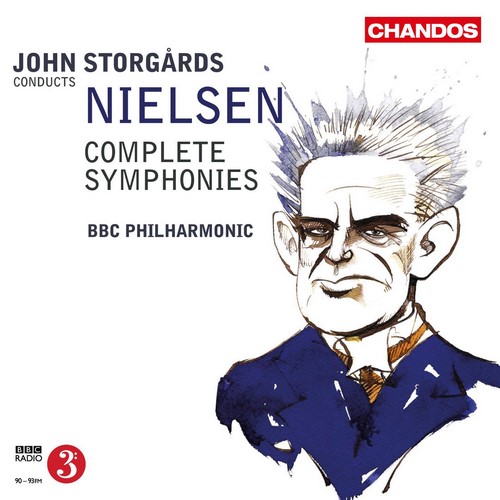 Symphony No. 1 in G minor
Symphony No. 2 ‘The Four Temperaments’
Symphony No. 3 ‘Sinfonia espansiva’*
Symphony No. 4 ‘The Inextinguishable’
Symphony No. 5
Symphony No. 6 ‘Sinfonia semplice’
John Storgards and the BBC Philharmonic here present a complete set of Nielsen’s symphonies, following on from the successful release a year ago of Sibelius’ complete symphonies. The two sets together celebrate the 150th anniversary this year of the birth of both composers. Several concerts devoted to Nielsen’s symphonies, played by the same forces, coincide with this release: on BBC 3 in February, at the Nielsen and Sibelius festival in Stockholm in April, during a week of celebrations at the Bridgewater Hall in June, etc.

Among the most performed works by Nielsen, these symphonies also reflect the composer’s musical emancipation from his early influences of folk music, Bach, Mozart, and even Brahms, Schumann, and Grieg, and his experimentation with progressive tonality and, later, radical departures from traditional compositional styles.

‘Carl Nielsen looked life straight in the face, and he never blinked: how many composers put their own heart attack into music? But no matter how startling, how vivid, or how outright eccentric Nielsen’s Sixth Symphony gets, it’s never depressing: this is music of life, not death. Everyone needs to hear it, and there’s no better guide than our principal guest conductor John Storgards’ BBC PO concert programme.’ BBC Philharmonic programme notes