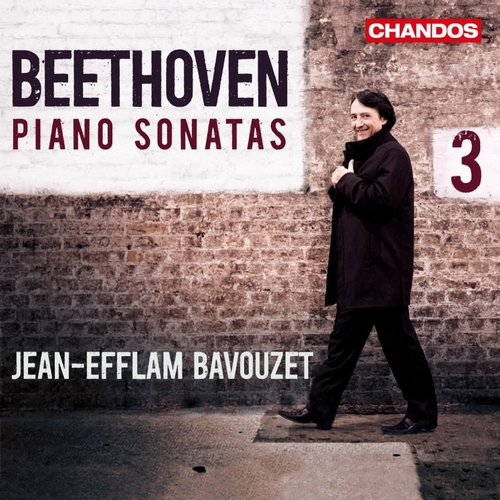 Op. 54 in F major
Op. 57 in F minor ‘Appassionata’
Op. 78 in F sharp major
Op. 79 in G major
Op. 81a in E flat major ‘Das Lebewohl, Abwesenheit und das Wiedersehen’
Op. 90 in E minor
Op. 101 in A major
Op. 106 in B flat major ‘Hammerklavier’
Op. 109 in E major
Op. 110 in A flat major
Op. 111 in C minor
Jean-Efflam Bavouzet’s fascinating journey through Beethoven’s complete sonatas now comes to an end with this third volume. The prodigious exploration reaches its culmination in this three-disc set – sold for the price of 2 CDs as were its two predecessors – featuring the most mature and exploratory of Beethoven’s sonatas, including the heroic, two-movement ‘Appassionata’. Bavouzet’s distinguished interpretations reveal not only the technical virtuosity but also the emotional power of these contrasted works. With his characteristically fresh and energetic, yet expressive and profound approach, Bavouzet captures a Beethoven drawing the contours of romantic keyboard textures that would become the staple of the next generation. This project will also resonate on the concert platform, as a series of recitals will take it to the most significant venues around the world.