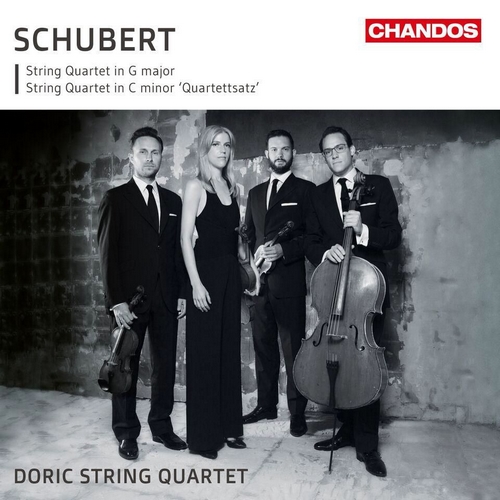 String Quartet in C minor, D 703 ‘Quartettsatz’
String Quartet in G major, Op. post 161, D 887
Alongside its highly praised Haydn series, the Doric String Quartet continues its Schubert journey with this second volume of quartets, which precipitates us into the fraught world of late Schubert. Both composers will be central in the Quartet’s recitals next year, to take place in the highest-profile international venues, from New York’s Carnegie Hall to Berlin’s Konzerthaus, Amsterdam’s Concertgebouw, and London’s Wigmore Hall. Franz Schubert returned to composing string quartets in the 1820s, after four years of focusing on songs which were beginning to gain him wider recognition. His late chamber compositions reveal probably his most characteristic music, full of deep intimacy and profound ambivalence. The ‘Quartettsatz’ (Quartet Movement) presents a turbulent, norm-breaking first movement. Only a fragment survives of a serene Andante in A flat, and nothing for any scherzo or finale. If the 'Rosamunde' and 'Death and the Maiden' (CHAN 10737) are the most frequently heard of the quartets of Schubert, his last completed one – in G major – certainly remains his most uncompromising in its vastness, and perhaps his most prophetic of the musical future.