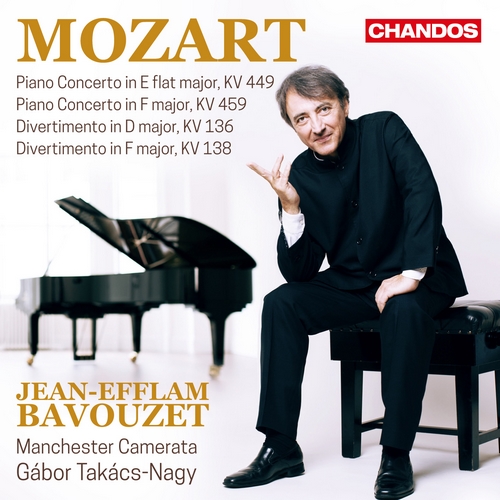 Concerto in E flat major for Piano and Orchestra, KV 449
Divertimento in D major for Strings, KV 136
Divertimento in F major for Strings, KV 138
Concerto in F major for Piano and Orchestra, KV 459
The effervescent and communicative energy of Bavouzet and Takács-Nagy is encapsulated again in this second volume of their Mozart series. These exhilarating interpretations of Mozart’s piano concertos of 1784, faultlessly supported by the Manchester Camerata, follow highly praised concerts as well as a first volume which was ‘Editor’s Choice’ in Pianist. The two concertos presented here are among the six that Mozart composed in Vienna in an extraordinarily productive year. As Bavouzet states in an exclusive personal note, they ‘share their association with operatic and symphonic styles. The contrasts of mood in their first movements and the cantilenas which serve as second movements relate them more closely with music for the operatic stage, while their finales are conceived in purely instrumental terms and make reference to the symphonic domain. On the other hand, these two works are complete opposites as far as their use of wind instruments is concerned. In KV 449 their inclusion is ad libitum, whereas they very often play the principal role in KV 459.’
Recording: Royal Northern College of Music Concert Hall, Manchester;