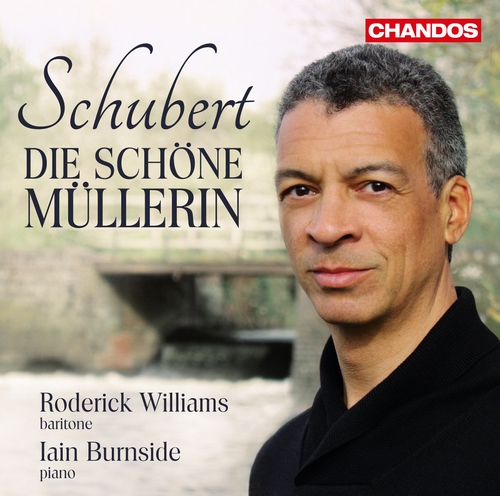 Die schöne Müllerin, Op. 25, D 795
(The Fair Maid of the Mill)
A Cycle of Songs by Wilhelm Müller for Solo Voice with Piano Accompaniment
In this the first of a series of three recordings of Schubert’s great song cycles for Chandos, Roderick Williams and Iain Burnside bring their formidable talents to bear on one of the pinnacles of classical lieder.

In November 2015, Williams decided to immerse himself in an intensive three-year period of studying and performing the three song cycles by Schubert, following an invitation from the Wigmore Hall to perform them – with Iain – in their 2017 / 18 season.

The process has involved not just performances in concert around the globe, but open rehearsals, master-classes, workshops, and radio broadcasts. Roderick Williams has documented all of these experiences in great detail in his fascinating Schubert Cycle Project blog.

He writes: ‘Somewhere along the way I came to a decision; that my eventual performances at the Wigmore would not be the ultimate goal of my study; rather, the study itself, the act of preparation would be my focus. It is possible that other singers might find the process interesting, even if only to share some of the grind that is most often done alone; it is also possible that others might be intrigued, especially audiences, perhaps even (fellow) students.’
Recording: Potton Hall, Dunwich, Suffolk; 13 and 14 July 2018. Piano: Steinway Model D (serial no. 592 087) concert grand piano.