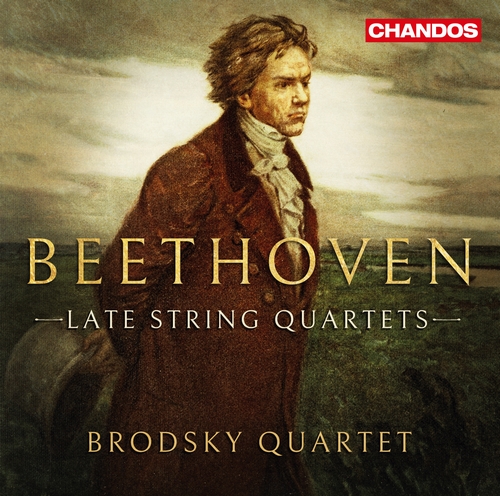 CD 3:
Quartet in A minor, Op. 132
Quartet in F major, Op. 135
The late quartets are among the last works that Beethoven completed, and are considered by many as the pinnacle of his achievements as a composer, and among the greatest compositions of all time. The Russian prince Nikolai Galitzin wrote to Beethoven in November 1822, requesting ‘one, two or three new quartets, for which labour I will be glad to pay you what you think proper’. This commission resulted in the Quartets, Opp. 127, 132, and 130, after which he went on to write Quartets, Opp. 131 and 135, and then the substitute final movement for Op. 130, which replaced the Große Fugue that originally had ended that piece – and which Stravinsky described as ‘an absolutely contemporary piece of music that will be contemporary for ever’. In this recording the Brodsky Quartet has chosen to include (emulating several other quartets) the Quartet, Op. 95. Although this piece significantly predates the others, in terms of innovation and compositional style it points strongly towards the later works.