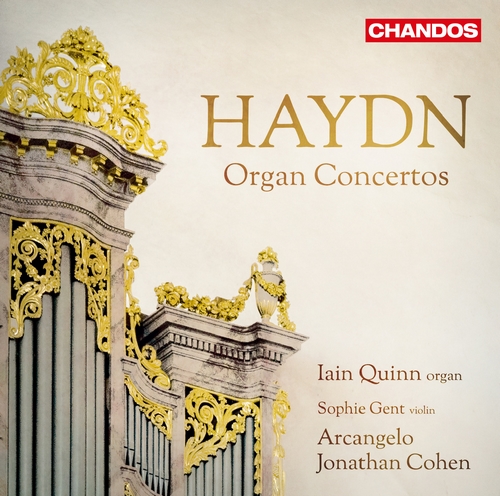 Concerto No. 1 in A major, Hob. XVIII:1
Concerto No. 6 in F major, Hob. XVIII:6
Concerto No. 2 in D major, Hob. XVIII:2
Iain Quinn is joined by Arcangelo and Jonathan Cohen in this recording of organ concertos by Haydn, recorded on the Grant, Degens, and Bradbeer organ of St Mary’s, Woodford. The violinist Sophie Gent joins the forces for the double concerto (No. 6). Concertos Nos 1 and 2 for organ are among the composer’s earliest works, and seem to have been written in the 1750s, before Haydn entered into the employ of the Esterházys, in 1761. It is possible that they could have been written for the organ in the Bohemian Chancellery chapel at the Judenplatz in Vienna, where Haydn was briefly employed. The double concerto dates from 1766, when Haydn was fully established as a composer and Kapellmeister.

Grant, Degens, and Bradbeer was an organ building firm ahead of its time in the sense that it was not following any English organ building trend at that period. The organ at St Mary’s is judged to be among the best instruments the company built, alongside the instruments in the Lyons Concert Hall, University of York, St Paul’s Girls’ School, Hammersmith, and New College, Oxford.
Recording: St Mary’s Parish Church, South Woodford, London; 19 – 22 March 2019. The orchestra uses gut strings and modern oboes. Pitch: A = 440 Hz. Sophie Gent plays a violin made by Jacob Stainer in 1676.