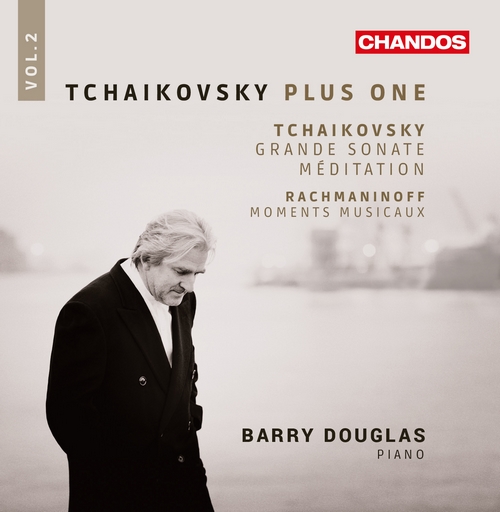 Czajkowski / Rachmaninow: Tchaikovsky Plus One, Vol. 2

Sergei Rachmaninoff:
Moments musicaux, Op. 16
Tchaikovsky’s Grande Sonate, or ‘Grand Sonata’ (Bolshaya Sonata), in G major was dedicated to Karl Klindworth, a pupil of Liszt, and first performed at a private hearing, on 21 October 1879, by Nikolay Rubinstein, founder of the Moscow Conservatory. Composed in the autumn of 1896, the Six Moments musicaux of Rachmaninoff adopt musical forms from previous eras: the nocturne, song without words, barcarolle, virtuoso étude, and theme and variations. Written in haste in order to meet the commission deadline (the twenty-three-year-old Rachmaninoff was desperately short of funds), the set evidences his virtuosity, and is full of portent of the music to come.

Barry Douglas writes: ‘This recording project with Chandos Records is a personal salute from me to great masterworks of the Russian repertoire. I am an Irish pianist who, nevertheless, feels a deep affinity with Russian culture, and felt it even before I had the good fortune to win the Tchaikovsky Competition in 1986. Our own Irish composer and virtuoso pianist John Field, who invented the Nocturne and taught a whole generation of Russian musicians, fermented the linkage between Ireland and Russia, and I feel very proud to help keep this synergy alive!’
Recording: Cedars Hall, Wells Cathedral School, Somerset; 16 and 17 April 2019. Piano: Steinway Model D (serial no. 602 944) concert grand piano.