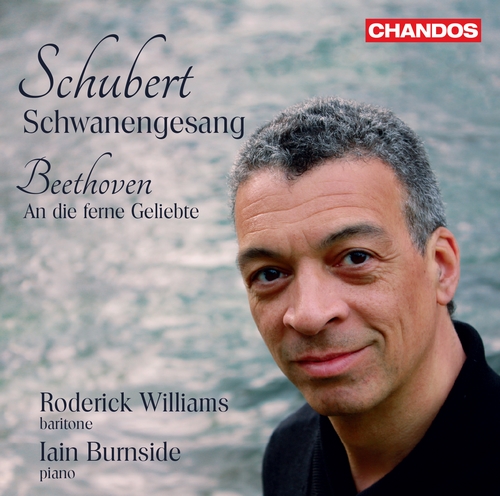 Ludwig van Beethoven:
An die ferne Geliebte, Op. 98
(To the Distant Beloved)
A Cycle of Songs by A.I. Jeitteles with Piano Accompaniment

Franz Schubert:
Schwanengesang, D 957
Although only twelve years separate the composition of Beethoven’s An die ferne Geliebte and Schubert’s Schwanengesang, the ethos and sound world of the two works are markedly different. Pairing them on the concert platform seemed an obvious choice on one hand, but I was reminded not to try to perform Beethoven in the way I perform Schubert. For one thing, the former still has the ring of the late classical, while the latter explores the darkness of the early romantic. For this reason, we decided to record the two works in slightly different soundscapes. In An die ferne Geliebte, the inventiveness of Beethoven is best expressed in the piano writing, while the vocal part is deliberately simple, strophic (the music is repeated for each stanza), and folk-like. ...the sixth song states that these songs are offered ‘ohne Kunstgepräng’. And so we have set the voice slightly more distantly in the balance, giving the piano due prominence; the effect is almost as if I were singing over Iain’s shoulder. Schwanengesang is recorded more traditionally: in these most extraordinary and progressive songs the vocal line is supported by the piano, in equal partnership.