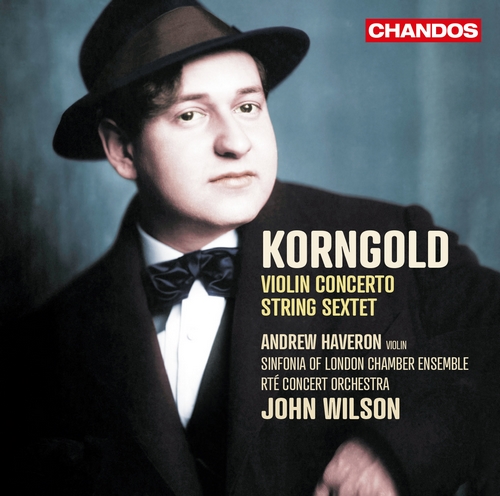 Violin Concerto in D major, Op. 35
String Sextet in D major, Op. 10
Korngold began work on his Violin Concerto in 1937, following his father’s suggestion that the main theme from his score for the Errol Flynn epic Another Dawn would make a good basis for a concerto. The work remained dormant while Korngold was exiled to Hollywood after the Anschluss. He resumed work on it in 1945, and fully revised it. Premiered by Jascha Heifetz in 1947, the Concerto is widely performed and recorded, and is certainly Korngold’s best-known concert work. Widely considered the greatest composer-prodigy since Mozart, Korngold composed the String Sextet in 1914, when he was only seventeen years old. It shows his fully developed style and assured idiomatic writing for the ensemble. Andrew Haveron leads the Sinfonia of London Chamber Ensemble in the Sextet, and is joined by John Wilson and the RTÉ Concert Orchestra in the Violin Concerto.
Recording: Studio 1, RTÉ, Dublin: 16 and 17 December 2015 (Violin Concerto); Potton Hall, Dunwich, Suffolk: 20 – 22 January 2019 (String Sextet). Andrew Haveron plays a violin made in 1757 by Giovanni Battista Guadagnini.