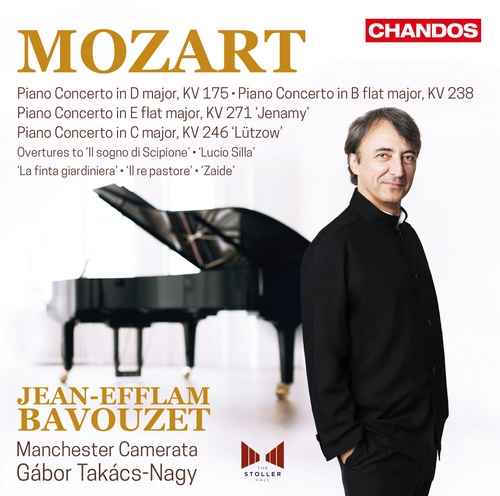 CD 2:
Overture to Il re pastore, KV 208
Concerto No. 8 KV 246 in C major
Overture to Zaide, KV 344
Concerto No. 9 KV271 'Jenamy' in E flat major
Jean-Efflam Bavouzet’s acclaimed series of piano concertos by Mozart reaches its fifth instalment. Concertos Nos 5, 6, 8, and 9 are complemented by the overtures to Il sogno di Scipione, Lucio Silla, La finta giardiniera, Il re pastore, and Zaide. That all of these works were composed by Mozart between the ages of fifteen and twenty-five serves as a vivid reminder of his unique talents as a child prodigy: these are not childhood efforts but mature works. The Fifth Concerto was actually Mozart’s first, as Nos 1 – 4 are arrangements of works by other composers. As in the previous volumes, Bavouzet is partnered by Manchester Camerata and Gábor Takács-Nagy, all recorded in The Stoller Hall in Manchester.
Recording: The Stoller Hall, Hunts Bank, Manchester; 4 and 5 May 2019 (KV 126, KV 135, KV 175, KV 196, KV 238) & 26 and 27 September 2019 (other works). Piano: Yamaha Model CFX nine-foot concert grand piano (serial no. 6410300-B).