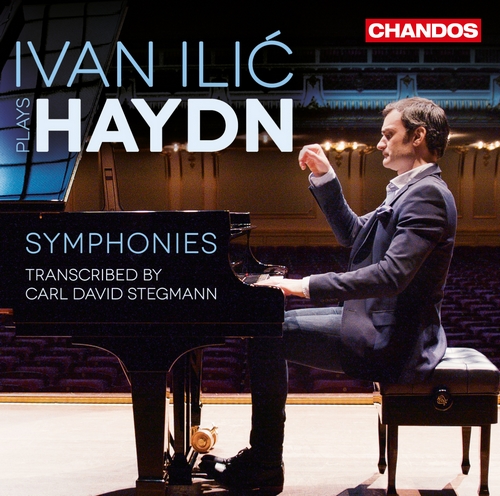 Symphony No. 92 'Oxford' in G Major, Hob. I:92
Symphony No. 75 in D major, Hob. I:75
Symphony No. 44 'Trauer' in E minor, Hob. I:44
Ivan Ilić came across these transcriptions, scarcely known at all, through the most unlikely and serendipitous sequence of events.

Carl David Stegmann (1751 – 1826) was a tenor, keyboard player, conductor, and composer, who worked mostly in the field of opera. Employed by the Court Theatre in Mainz (where he sang in the first German-language production of Don Giovanni), he also gave a number of acclaimed performances in Frankfurt.

Ivan Ilić writes: ‘It is unclear to me whether these transcriptions were ever meant to be played as concert repertoire, in public. Nevertheless, the enthusiasm I have encountered wherever I have played them has persuaded me to make this recording, to allow more people to hear Stegmann’s idiomatic arrangements.’
Recording: Potton Hall, Dunwich, Suffolk; 28 February – 2 March 2019. Played on Steinway Model D (serial no. 592 087) concert grand piano.