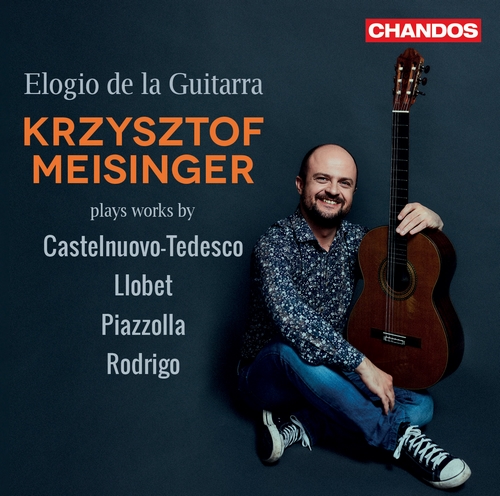 Astor Piazzolla:
Cinco Piezas (Five Pieces)
Krzysztof Meisinger is one of the most fascinating and charismatic classical guitar players of our time. Born in 1984, he has seen his artistic development benefit from the immense influence of such teachers and music authorities as Aniello Desiderio (Italy) and Christopher Parkening (USA), his talent compared to that of the pianist Piotr Anderszewski and fellow guitarist Pepe Romero. He has performed all over the world – from Tokyo to Los Angeles and Buenos Aires – in such halls as the Wiener Musikverein, Berliner Philharmonie, Wigmore Hall, London, and Théâtre du Châtelet, Paris.

For this, his Chandos début, he has selected a diverse programme of Spanish, Italian, and Argentine works that demonstrate both his technical mastery and his innate musicianship. Rodrigo’s Invocación y danza and Elogio de la guitarra were composed a decade apart, and written for the guitarists Regino Sainz de la Maza and Angelo Gilardino, respectively. Miguel Llobet Solés was a pupil of Tárrega and the teacher of Segovia, thus playing an important role in the Spanish guitar tradition. Segovia was the dedicatee of Castelnuovo-Tedesco’s Capriccio diabolico, a homage to Paganini. Although much music by Piazzolla has been arranged for guitar, his Cinco Piezas, published in 1981, are the only works he wrote specifically for the instrument.
Recording: Witold Lutosławski Concert Studio, Polish Radio, Warsaw, Poland, 5, 8 and 24 May 2021. Krzysztof Meisinger plays a copy of a guitar by Ignacio Fleta Pescador (1897–1977), built by Anders Sterner and equipped with Knobloch strings.