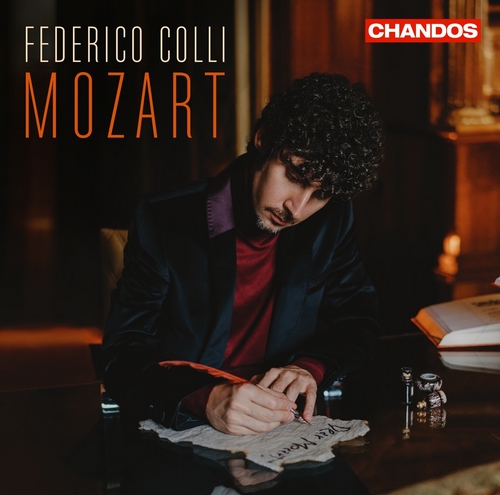 Fantasie in C minor, KV 396
Adagio in C major, KV 356 (after work for glass harmonica)
Fantasie in D minor, KV 397
Menuett in D major, KV 355
Fantasie in C minor, KV 475
Rondo in D major, KV 485
Sonata in B flat major, KV 333
Praised by Gramophone as ‘one of the more original thinkers of his generation’, the Italian pianist Federico Colli is internationally recognised for his highly imaginative and philosophical interpretations and impeccable technique. This album is the first instalment of a new, intensely personal project for the pianist: an exploration of selected piano works by Mozart. It was the discovery (at the age of around six) of Mozart’s music that caught the imagination of the young Federico and inspired him to study music, and it was winning the International Piano Competition Mozart, in Salzburg, that launched his career as a pianist.

His approach has been to immerse himself completely in Mozart’s own experience at the composition of each piece: where was Mozart living, what was he doing, what were his motivations behind each composition? Only after in-depth study of biographies of Mozart, his (and others’) letters, the historical, social, and political background, the Zeitgeist, the cultural atmosphere surrounding each work, does Colli then approach the scores and start the process of building his interpretations.
Recording: Potton Hall, Dunwich, Suffolk; 6 – 8 August 2021. Piano: Steinway Model D Concert Grand Piano (serial no. 592 087).