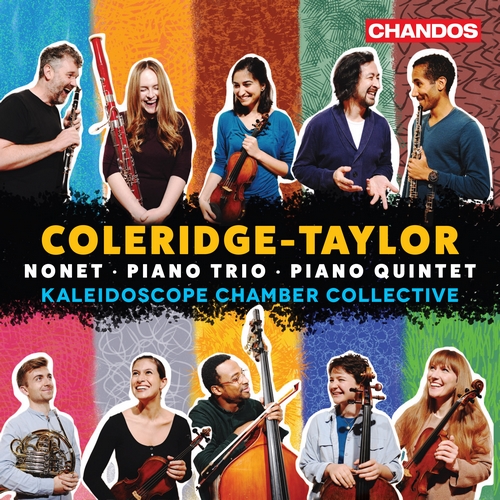 Nonet in F minor, Op. 2 ‘Gradus ad Parnassum’
Trio in E minor
Quintet in G minor, Op. 1
Samuel Coleridge-Taylor is best known for his cantata Hiawatha’s Wedding Feast, which brought him international success as well as propelling his career at home in the UK – success which was remarkable in stuffy late-Victorian England because of his mixed race and humble origins. Born out of wedlock to Daniel Taylor, a medical student from Sierra Leone, and Alice Holmans, Samuel was brought up by his mother and step-father, George Evans, a railway worker, in Croydon, south London.

The three pieces recorded here were all composed during his time as a student at the Royal College of Music. They were destined to remain unpublished during his lifetime, and indeed for some ninety years following his untimely death from pneumonia at the age of only thirty-seven. Performing editions were eventually prepared from the surviving manuscripts – which had remained in the RCM’s archive – in the early 2000s, offering modern performers and audiences the chance for the first time to savour exactly how precocious the creative talents of the teenage Coleridge-Taylor had been.

The Kaleidoscope Chamber Collective has consulted the manuscripts and corrected numerous inaccuracies in these editions. Described by The Arts Desk as ‘a sparky, shape-shifting ensemble of starry young musicians’, the Collective has been thrilling audiences with its charismatic programming and outstanding musicianship.
Recording: Potton Hall, Dunwich, Suffolk; 29 – 31 October 2021. Piano: Steinway Model D Concert Grand Piano (serial no. 592 087).