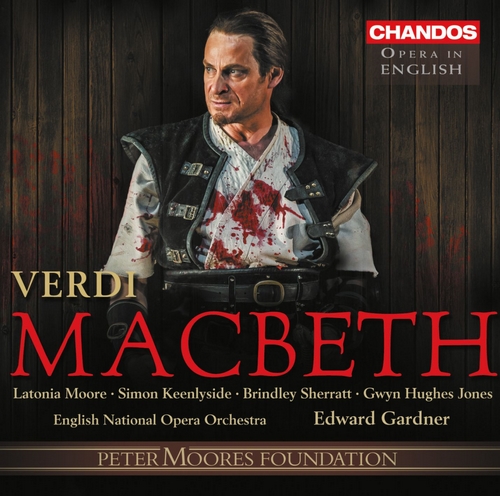 Macbeth (1865 version, with additions from 1847 version)
libretto in english
This recording of Verdi's Macbeth marks the completion of the Peter Moores Foundation's remarkable Opera in English series, established in 1995 with the aim of making opera available to wider audiences by presenting the highest quality opera performances in English. Here a translation by Jeremy Sams is sung by an all-star cast including Simon Keenlyside as Macbeth and Latonia Moore as Lady Macbeth. Edward Gardner conducts the English National Opera Orchestra.

Macbeth is the first of three Verdi operas based on dramas by William Shakespeare. Described by Verdi as ‘one of the greatest creations of man’, Macbeth’s ‘grandeur, breadth, and sublime, rarefied, and strange atmosphere’ inspired Verdi to adapt this tale of power, corruption, and devilry. Having previously concentrated on historical narratives, in Macbeth Verdi engaged in dark supernatural themes for the first time. The subject matter provided Verdi opportunity to expand on his abilities as a tone poet; he extended the contribution of the orchestra to the drama and introduced orchestral detail and colour not before seen in his operatic scores.

In 1865, eighteen years after its triumphant premiere in Florence, Verdi was asked to revisit the score for a Paris revival. This revised version forms the basis of the present recording which also includes additions from the original score.