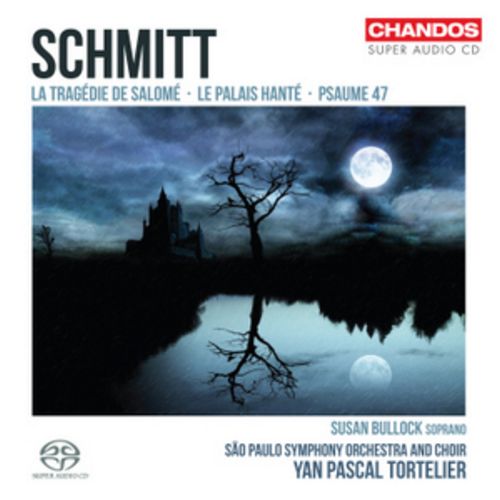 Psaume 47, Op. 38
La Tragédie de Salomé, Op. 50
Le Palais hanté, Op. 49
Florent Schmitt was well known as a critic and composer during his lifetime, but his compositions fell into neglect after his death. Difficult to pigeonhole, he has been called everything from conservative to neo-romantic to revolutionary, and Dutilleux wrote of him that he ‘gave back to the French school certain notions of grandeur’.

The three works on this CD are all remarkable in their own ways – for their rhythmic exuberance, their rich and varied orchestration, their imaginative use of traditional harmonies, and in the case of Le Palais hanté and La Tragédie de Salomé for their exploration of the dark side of humanity. Schmitt’s setting of Psaume 47 for soprano, chorus, organ, and orchestra was premiered in 1906. This was to be the only choral score on an epic scale by a French composer until Honegger wrote Le Roi David twenty years later.

Several other important compositions followed, the symphonic poem La Tragédie de Salomé being perhaps Schmitt’s best-known work today. The original ballet, scored for a modest-sized orchestra, was performed at the Théâtre des Arts in Paris, but Schmitt later shortened the work while substantially expanding the orchestration. Le Palais hanté is based on a poem from The Fall of the House of Usher by Edgar Allan Poe. A recurring message in the writings by Poe is that all good things in life are transitory and – however good and stable things may seem – evil lurks just around the corner.

In this work, Schmitt marries the sense of doom inherent in the poem – evident from the very first phrase – with a style that is reminiscent of Liszt. On this SACD, the Sao Paulo Symphony Orchestra and Choir are conducted by Yan Pascal Tortelier, an exclusive Chandos artist who over the years has built up an impressive and highly regarded discography with the label.