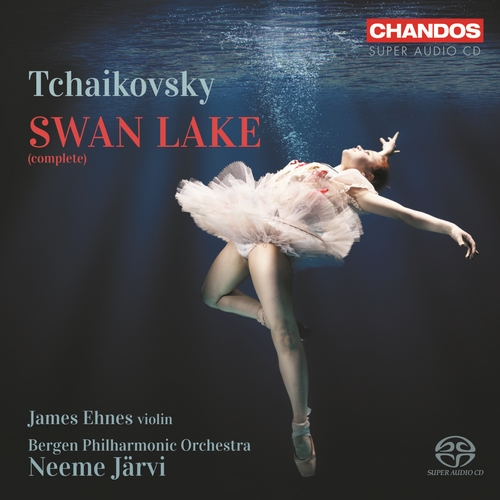 This is the second instalment in our series devoted to Tchaikovsky’s three great ballets. Neeme Järvi and the Bergen Philharmonic Orchestra initiated the project last year with the complete score of The Sleeping Beauty. Here they present another, equally well-loved work: Swan Lake. Once again they bring us the complete uncut version of the score, with the pre-eminent James Ehnes lending his magic to the violin solos. The complete score of The Nutcracker will follow in 2014.

In Swan Lake, the Swan Queen takes her melancholy, oboe-led place among the composer’s many heroes and heroines destined never to know lasting fulfilment in love. The story tells of Odette, a princess turned by an evil sorcerer’s curse into a swan, and thus caught between the human and supernatural worlds, until she is finally released from the spell, and united in death with her true love.

This was Tchaikovsky’s first full-length ballet, but its premiere in 1875, staged at Moscow’s Bolshoy Theatre, was by no means a resounding success. According to most accounts, the choreography was inept, the shabby sets and costumes were borrowed from other productions, and the orchestral playing was poor.

As such, most ballet companies today base their productions on the 1895 revival by the pre-eminent choreographer Marius Petipa, staged for the Imperial Ballet at the Mariinsky Theatre in St Petersburg. For this revival, Tchaikovsky’s score was revised by the composer Riccardo Drigo, also the chief conductor of the St Petersburg Imperial Theatre. Although these amendments may have served the conventional 1890s notion of ‘danceability’, one may argue that the overall cuts and reordering ultimately destroyed Tchaikovsky’s ground-plan of drama and tonality.

In this recording, we present Tchaikovsky’s original score of twenty-nine numbers and four acts, written for the Bolshoy Theatre, along with several supplementary numbers provided not long after the initial 1875 premiere.
Recorded in: Grieghallen, Bergen, Nory 18 June and 3-6 December 2012