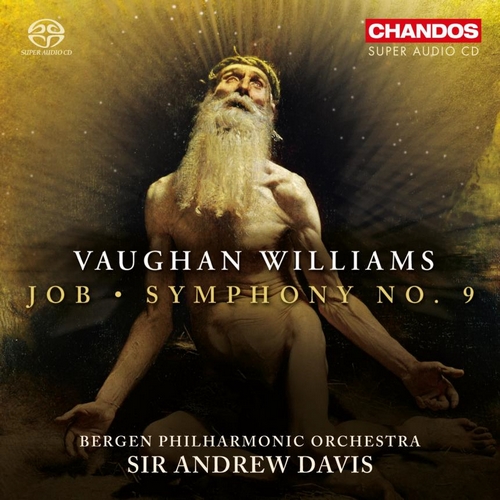 Symphony No.9 in E minor:
I. Moderato maestoso – Tranquillo
II. Andante sostenuto – Poco animando – Tempo I – Moderato tranquillo – Tempo I – Poco animato ma pesante – Moderato sostenuto – Tempo I
III. Scherzo. Allegro pesante – Tempo del principio
IV. Andante tranquillo – Poco animato – Tempo I – Andante sostenuto – Tempo I – Poco animato – Poco animato – Andante sostenuto – Poco meno mosso – Poco animando – Ancora poco animando – Poco animato ma pesante – Largamente
projected complete cycle of Vaughan Williams’s symphonies started by the late Richard Hickox has left a precious heritage in the discography of the composer. Now, conducting the Bergen Philharmonic Orchestra, another great authority in British repertoire, Sir Andrew Davis, takes on the challenge of completing the series with idiomatic interpretations of two masterpieces: the final Symphony (No. 9) and the ballet Job. The score of Job places an emphasis on tableau-like scenes, dances, and mime, linking it to a tradition of English ballet with dances from the seventeenth century, including the saraband, pavane, and galliard. In this masterly score, Vaughan Williams captures the conflict between good and evil, between the spiritual and the material. Job shows a strength, beauty, nobility, and visionary power which unite the many different facets of Vaughan Williams’s musical style. The poignant and musically enigmatic Symphony No. 9 marks ‘the end of Ralph’s life and [is] a turning point. It is leading out into another place. It is extraordinary’, as the composer’s wife stated after one of the early performances. The subtle direction of Sir Andrew Davis combined with the pure sound quality of this SACD does full justice to Hickox’s great enterprise and promises a powerful conclusion of this already acclaimed recorded cycle.
Recorded at Grieghallen, Bergen, Norway on 2 – 4 and 6 May 2016 and Domkirken, Bergen, Norway on 5 May 2016