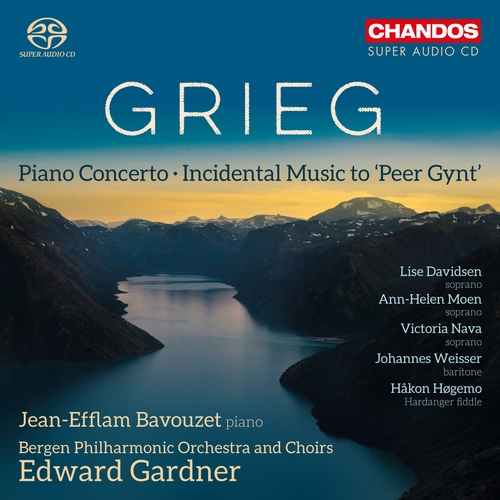 Incidental Music to ‘Peer Gynt’, Op. 23 for Solo Voices, Chorus, and Orchestra
Concerto, Op. 16 in A minor for Piano and Orchestra
This much awaited recording offers keenly idiomatic performances of the most famous works by Grieg, played by the composer’s own orchestra, the Bergen Philharmonic, and its Chief Conductor, Edward Gardner.

The drama and passion of such favourite pieces as the incidental music to Peer Gynt and the Piano Concerto are superbly captured in surround-sound with exemplary Chandos sound quality.

Unlike most existing recordings, offering only the orchestral suites, this disc presents numerous extra excerpts from Peer Gynt, which follow the sequence of Henrik Ibsen‘s dramatic poem, including sections for the unique Norwegian 'Hardanger Fiddle’.

Having collaborated with the orchestra on several occasions, Jean-Efflam Bavouzet is the soloist in the Piano Concerto, a piece that stands out as a shining example of a single great thought captured and expressed in music. The power of this conception is evident throughout the concerto in the pianist’s faithful, yet highly romantic interpretation.
Recording: Grieghallen, Bergen, Norway; 16 and 17 June 2016 (Incidental Music to Peer Gynt) & 22 and 23 June 2017 (Piano Concerto)