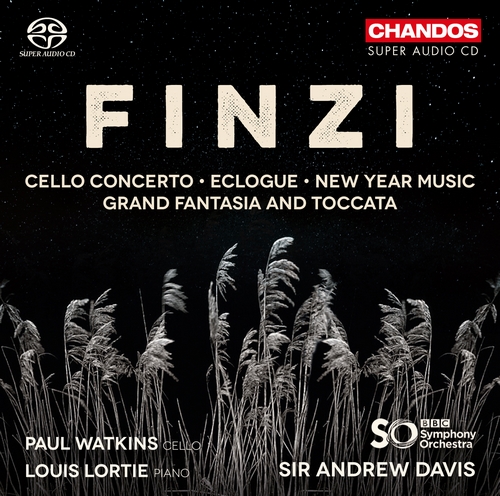 Cello Concerto in A minor, Op. 40
Nocturne (New Year Music) in C sharp minor, Op. 7
Grande Fantasia and Toccata in D minor, Op. 38
Eclogue in F major, Op. 10
A broad and meticulous selection of orchestral works and concertos by Gerald Finzi is here matched by a first-class cast of soloists, supported by the BBC Symphony Orchestra under the direction of Sir Andrew Davis, expert in British repertoire and conducting this year’s Last Night of the Proms.

Paul Watkins displays exhilarating virtuosity in the Cello Concerto, a central work on this album, composed in the wake of the devastating news that Finzi was terminally ill, but yet filled with ‘vigorous, almost turbulent thematic material’, as he wrote in the programme note for the work’s premiere at the Cheltenham Music Festival in 1955.

Louis Lortie, for his part, tackles the high-spirited and majestic Grand Fantasia and Toccata, the Fantasia originally conceived as part of a concerto for piano and strings and first performed on two pianos. This contrasts with the more restrained Eclogue for Piano and Strings, timeless, and blessed with a mood of benediction.

plays a cello made by Domenico Montagnana and Matteo Goffriller in Venice, c. 1730. Louis Lortie plays on The Bösendorfer 280 VC-23 Vienna Concert Grand Piano (A / N 50659).