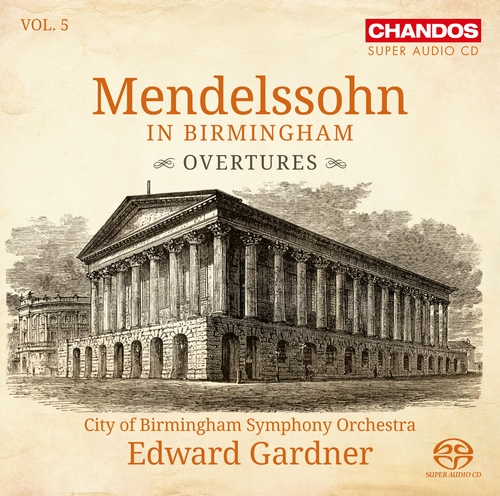 Die schöne Melusine, Op. 32
Overture to Paulus, Op. 36
‘Trumpet’ Overture, Op. 101
Overture to Athalie, Op. 74
The Hebrides, Op. 26
Overture to Ruy Blas, Op. 95
Meeresstille und glückliche Fahrt, Op. 27
Ein Sommernachtstraum, Op. 21
Edward Gardner’s Mendelssohn in Birmingham series continues with an album that collects eight overtures. As on the previous volumes, a reduced-size CBSO joins Gardner in Birmingham’s Town Hall, where Mendelsohn himself conducted many of the UK premieres of his own orchestral works. Mendelssohn composed the majority of the works in the programme as concert overtures, spanning the length of his career, from the early Ein Sommernachtstraum (A Midsummer Night’s Dream), composed when he was just sixteen, through to Ruy Blas, written towards the end of his life.

He composed two of these overtures as the opening movement of larger works: Paulus, his first great oratorio, from 1836, and Athalie, incidental music written for Racine’s play. The ‘Trumpet’ Overture is the earliest work here, written possibly to precede a performance of Handel’s Israel in Egypt, and allegedly the favourite, among Mendelssohn’s works, of Mendelssohn’s father!
Recording: Town Hall, Birmingham; 20 and 21 October 2013 (The Hebrides),