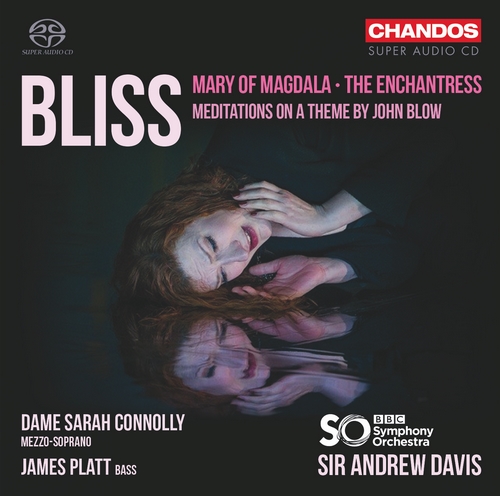 Bliss: Mary of Magdala & other works

The Enchantress
Meditations on a Theme by John Blow (Psalm XXIII – The Lord is my Shepherd)
Mary of Magdala - Cantata for Contralto and Bass Soli, Chorus, and Orchestra
Bliss composed The Enchantress in 1951, the year of his sixtieth birthday, for Kathleen Ferrier. The text is a free adaptation of the Second Idyll of Theocritus, made by Henry Reed, and well suited to Bliss’s love of classical Greek authors.

Meditations on a Theme by John Blow, from 1955, was written for the CBSO, the first in a number of commissions from the John Feeney Trust. Inspired by John Blow’s Coronation Anthems, the work is a set of variations on a Sinfonia from that collection, each variation reflecting the text of a verse from Psalm 23. Described as a sacred cantata, Mary of Magdala was Bliss’s second Feeney Trust commission, composed during 1962 and 1963. For a libretto, Bliss turned to Christopher Hassall, his collaborator on three previous works, including The Beatitudes.

Bliss conducted the premiere at the Three Choirs Festival in 1963, and wrote in his programme note: ‘One of the loveliest stories in the New Testament is that in the 20th chapter of St John’s Gospel, telling of how Mary Magdalene, lingering at the sepulchre, was the first to see the risen Christ. She, supposing him to be the gardener.’

The BBC Symphony Orchestra and Chorus give of their best under their former chief conductor Sir Andrew Davis, and the contributions from the soloists, Dame Sarah Connolly and James Platt, are outstanding. Recorded in Surround Sound.
Recording: Watford Colosseum; 13 and 14 April 2019