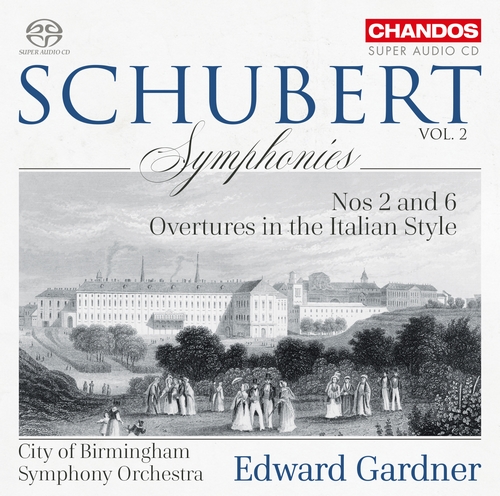 Symphony No. 2 in B flat, D 125
Symphony No. 6 in C, D 589 'Little C Major'
Overture ‘in the Italian Style’ in D major, D 590
Overture ‘in the Italian Style’ in C major, D 591
For the second volume in his Birmingham Schubert symphony cycle, Edward Gardner turns to the second and sixth symphonies. Composed between December 1814 and March 1815, the Second Symphony is not only a response by Schubert to the works of Beethoven, and especially the Prometheus Overture, but also strives to push the conventional symphonic boundaries, most notably in the extended exposition of the first movement.

Completed in February 1818, the Sixth Symphony was the first to be titled Große Sinfonie (grand symphony) by Schubert, a mark of his growing confidence in his work in the symphonic idiom.

The two overtures were composed at the same time as the sixth symphony, and are clearly modelled on the overtures of Rossini, whose music was all the rage in Vienna at that time.
Recording: Town Hall, Birmingham; 9 and 10 July 2019. Recorded in SURROUND SOUND, and released on hybrid SACD.