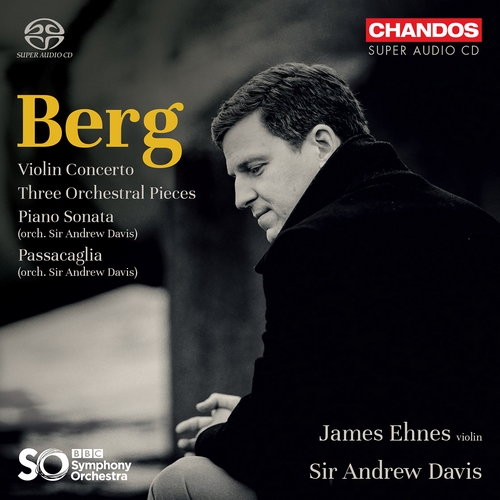 Piano Sonata in B minor, Op. 1
Passacaglia
Three Orchestral Pieces, Op. 6
Violin Concerto
Born in 1885, Alban Berg was one of the most significant composers of the Second Viennese School, whose output proved tremendously influential in the development of music in the twentieth century. He was a student of Schoenberg, who found that his juvenile compositions were almost exclusively written for voice; his natural ability to write lyrical melodic lines (even in later life while following the restrictions of twelve-tone serialism) probably remained the most outstanding quality of his style. His Op. 1 Piano Sonata was the fulfilment of a task set by Schoenberg to write non-vocal music. The Passacaglia, written between the sonata and World War I was only completed in short-score, and may have been intended to form part of a larger work. Both pieces are recorded here in skilful orchestrations by Sir Andrew Davis.

The Three Orchestral Pieces were composed alongside his first great masterpiece, Wozzeck, and could be seen as a tribute to his musical hero, Mahler. The Violin Concerto, from 1935, was commissioned by the American violinist Louis Krasner, but was inspired by the premature death (from polio) of Manon Gropius, the daughter of Alma Mahler and the architect and Bauhaus founder Walter Gropius, hence the subtitle ‘to the memory of an angel’. It proved to be one of the composer’s final works as Berg died later that year as the result of an abscess from an insect sting.
Recording: Watford Colosseum; 20 and 21 February 2022. James Ehnes plays the ‘Marsick’ Stradivarius, of 1715.