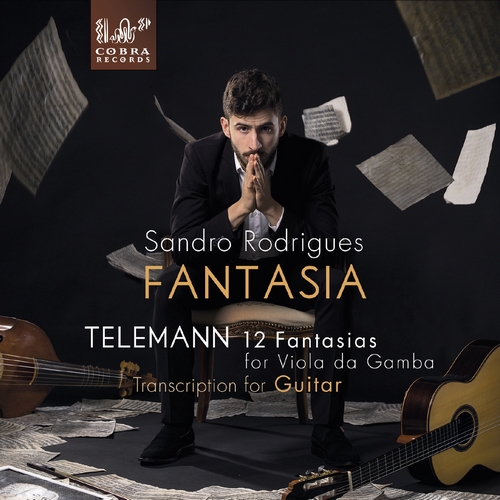 Cobra - COBRA 0075
Kompozytor
Georg Philip Telemann (1681-1767)
Wykonawcy
Sandro Rodrigues, guitar
Fantasia I (TWV 40:26)
Fantasia II (TWV 40:27)
Fantasia III (TWV 40:28)
Fantasia IV (TWV 40:29)
Fantasia V (TWV 40:30)
Fantasia VI (TWV 40:31)
Fantasia VII (TWV 40:32)
Fantasia VIII (TWV 40:33)
Fantasia IX (TWV 40:34)
Fantasia X (TWV 40:35)
Fantasia XI (TWV 40:36)
Fantasia XII (TWV 40:37)
Georg Philipp Telemann (1681-1767) was regarded by his contemporaries as one of the best composers of his time, but today we know that, in addition, he was the most prolific among all of them with more than three thousand works of different styles, many of which have never been known or the manuscripts were lost during the Second World War. Although his works were published both in Paris and in Germany, and these were acquired and distributed by musicians from all over Europe giving him more popularity than Johann Sebastian Bach, he was soon ignored and belittled until interest in his music gradually resurfaced in the twentieth century, thus slowly regaining the place that recognizes him as one of the great composers of his time. In this gradual process of recovering Telemann’s music, it has taken place sporadically and re-highlight the work of the Magdeburg composer. This is the case of the Fantasies pour la Basse de Violle, a collection of twelve fantasies for viola da gamba transcribed for guitar on this CD. The twelve fantasies were written and released by Telemann’s own publishing house in Hamburg in 1735 and considered lost until an original print was found in a private collection in 2015. These fantasies are instrumental compositions with origin from the Renaissance and are characterized by coming ‘only from the fantasy and skill of the author’, with formal and stylistic aspects that can openly vary between a free and improvised character to strict counterpoints and more or less standardized forms. They are therefore part of Telemann’s music collections for unaccompanied instruments, together with the XII Fantasias per il Violino, senza Basso, the twelve fantasias for flute and the thirty-six pieces for keyboard, all written between 1732 and 1735. The young and talented Portuguese gitarist Sandro Rodrigues has taken it upon himself to transcribe the these recently discovered Fantasies pour la Basse de Violle for guitar. After trying the first few transcriptions on guitar he found that this music works very well for this instrument also due to the similarities between the viola da gamba and guitar. On this CD Sandro Rodrigues brings the music of Georg Philipp Telemann to the 21st century on guitar without losing the soul of the 12 Fantasias.

Sandro Rodrigues (1996) started to study guitar, officially, at the age of 10 in the Academia de Música de S. Joao da Madeira, with Professor Carlos Moreira. In 2011 he entered de Escola Profissional de Música de Espinho, where he studied with Professor Tiago Emanuel Cassola for three years. In 2014 he started at the Conservatorio Superior de Música de Aragón in Zaragoza with the masters Pedro Mateo and Alex Garrobé. He also studied Ancient Plucked Instruments with the theorbist Daniel Zapico. Sandro is now complementing his studies in the Netherlands with the Maestro Carlo Marchione. Sandro has premiered works from composers like Nuno Peixoto, Bernardo Pérez and Alberto Caracciolo and has been in masterclasses of great guitarists, such as Ricardo Gallén, Judicael Perroy, Dejan Ivanovic, Marco Socías, Marlon Titre, Marco Smaili and many others.
Recording: Koepelkerk, Renswoude, The Nederlands, August 19, 20, 21, 2019 and December 6 & 7, 2019. Guitar: Paco Santiago Marín XXX Aniversario (2015)