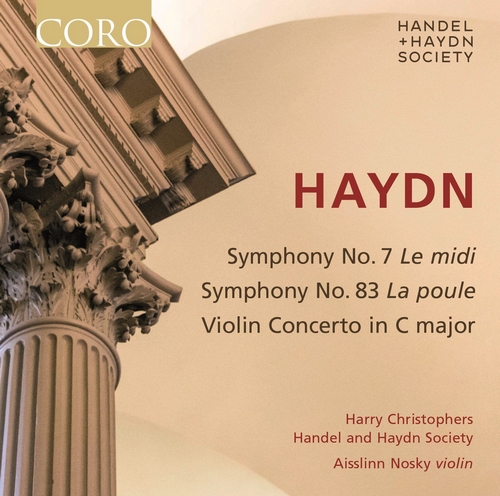 Symphony No. 7 Le midi Hob.I/7
Symphony No. 83 La poule Hob.I/83
Violin Concerto in C major Hob.VIIa/1
In a programme packed full of great drama and theatricality, Harry Christophers and the Handel and Haydn Society present a new live recording devoted to the master of the symphony. This album showcases Haydn’s Symphony No. 7 Le midi which is amongst the most striking of his early symphonies and one of the very first the composer wrote as Kapellmeister to Prince Paul Anton Esterházy. It is set alongside the much later Paris Symphony No. 83 La poule, named as such because of its famous clucking dotted note motif. Completing the programme is the Violin Concerto in C major performed by H+H’s fiery and expressive Concertmaster, Aisslinn Nosky. Handel and Haydn Society is America's oldest continuously operating arts organisation. Its Bicentennial celebration began with the 2014-2015 Season and continues into the 2015-2016 Season. Harry Christophers has been Artistic Director since 2008.