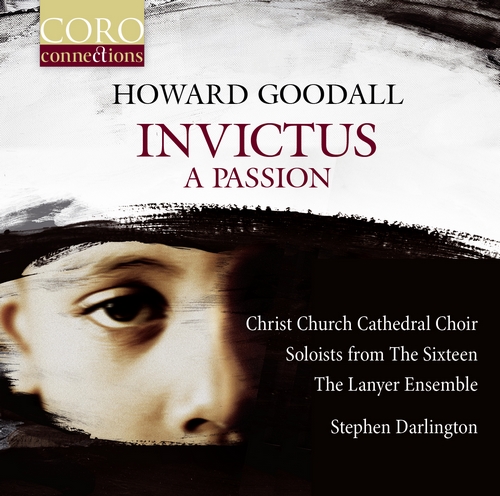 Gethsemane
Lamentation
Chorale - His Paths are Peace
Compassion
Invictus
Golgotha
Easter Hymn
The Song of Mary Magdalene - 'Now we are they who weep'
I will arise
Christ Church Cathedral Choir and Stephen Darlington join forces with Soloists from The Sixteen and a stellar group of instrumentalists on this premiere recording. Persecution of the innocent, malevolent authority exerting itself against ideas that threaten and challenge, the power of a peaceful, loving humility in the face of tyranny, the facing-down of fear; all hold profound universal resonance for people of many faiths and those of none. Such is the power of the Passion story and in his new work, Invictus: A Passion, multi-award-winning composer Howard Goodall has found a route directly to people’s hearts, telling the story afresh through his choice of thought-provoking texts combined with heart-rending yet inspiring music. Howard Goodall is a composer of choral music, stage musicals, TV and film scores and a music historian and broadcaster. His choral music has been commissioned to mark many national ceremonies and memorials; his settings of Psalm 23 and Love divine are amongst the most performed of all sacred music. Howard has composed some of the bestknown British TV theme tunes of the last 30 years, and his score for the HBO film Into the Storm won him a Primetime EMMY award for Original Dramatic Score in 2009. For the past 25 years he has written and presented his own TV documentary series on the theory and history of music. Although 500 years old, Christ Church Cathedral Choir is justly famous for the youthfulness of its sound and its daring and adventurous musical programming. Unique in the world as both Cathedral and College choir, the intimate acoustic of its musical home, Oxford’s 12th-century Cathedral, has given it a relationship with early sacred music and the rhythm and vigour of contemporary idioms which is second to none.
Recorded at St John the Evangelist Church, Iffley Road, Oxford, 14-16 March 2018