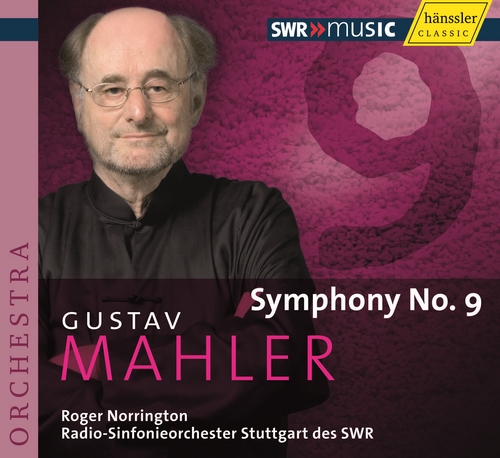 Mahler: Symphony No. 9 in D major

The Ninth Symphony is the last of Gustav Mahler's "official" symphonies, and has

long been regarded as his “swan song.” Following the completion of the huge

Eighth Symphony, the "Symphony of a Thousand" Mahler was informed by his

doctor about an incurable heart ailment and soon after he died, only 50 years old,

never having heard his Ninth Symphony. In this symphony Mahler wrestles with

his own mortality and plunges into the dark night of the soul. The resulting music

accounts for some of the most passionate and confessional pages ever

On a purely musical basis, the Ninth straddles the boundary between late

Romanticism and early modernism – as is manifested in the dissolution of tonality.

Roger Norrington and the Stuttgart Radio Symphony Orchestra have entered into

this emotionally conflicted sound-world without sentimentality. As is now well

know, Norrington's experience in dealing with historical performance practice, has

performance, whose main characteristic is the for the strings to play without

vibrato – a performance style now known as the "Stuttgart Sound". As can be

heard in Norrington’s previous Mahler recordings, this interpretative decision can

yield some profound musical results – from the transcendentally pure to the

harrowing. No doubt, Norrington’s Ninth will become one of the most talked-about