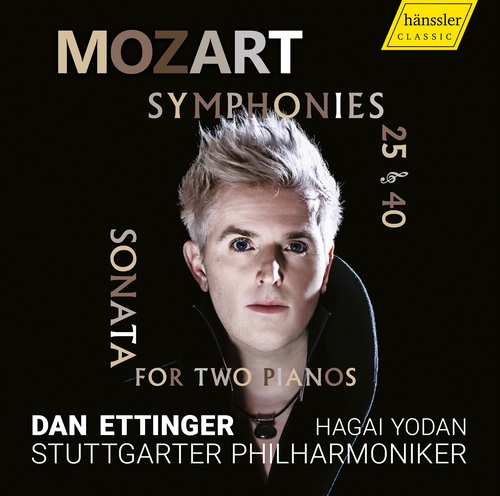 Symphony in G minor, KV 183
Sonata for two pianos in D major, KV 448
Symphony in G minor, KV 550
Dan Ettinger is one of the leading international conductors of his generation. Since the start of the 2015/2016 season he has been Principal Conductor of the Stuttgart Philharmonic and General Music Director of the City of Stuttgart. His contract was prematurely extended in July 2016 to run till the summer of 2023. Ettinger regularly conducts at the world’s great opera houses such as the Metropolitan Opera in New York, the Washington National Opera, London’s Royal Opera House at Covent Garden, the Opéra National de Paris, the New National Theatre in Tokyo, Opernhaus Zürich, the Salzburg Festival and the State Opera Houses of Vienna and Munich.

Born in Israel, 1985, Hagai Yodan is a a multidisciplinary artist: musician, photographer, writer and stylist. As a musician – he is a pianist, vocalist, harpsichordist and composer. He is mainly a recording artist and has established his own independent label – HYM. Hagai is an avid performer of new music and has premiered works by dozens of composers. His long standing collaboration with Dan Ettinger has produced this rendition of Mozart’s Sonata for Two Pianos.