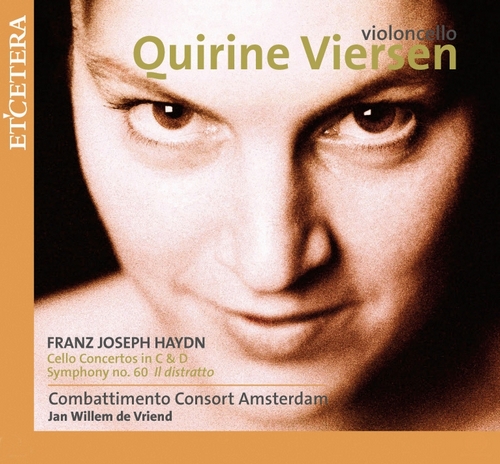 The music-loving English poet John Keats wrote that Haydn is like a child: you never know what he is going to do next. He is absolutely correct, for Haydn kept his playful character combined with an increasing depth in his music throughout his life and it is primarily this aspect of his character that causes us to feel so irresistibly drawn to his music. Take, for example, the first movement of his Cello Concerto in C major: in the development section he plays a delightful game with the melodic theme and the thrumming rhythmic motive; the composer’s own enjoyment is palpable. In the Adagio, the second movement, almost every phrase has an unexpected ending. The Finale in its turn bursts with the joy of life and virtuoso acrobatics.

Quirine Viersen is often among the winners in international competitions, including the 1990 Rostropovich Competition in Paris and the 1991 International Cello Competition in Helsinki. In 1994, Quirine became the first Dutch musician to win a prize at the prestigious Tchaikovsky Competition. The biggest award that Quirine Viersen has won thus far was the 2000 Young Artist Award, awarded by the Credit Suisse Group. This award came complete with a concert appearance with the Wiener Philharmoniker under conductor Zubin Mehta during the 2000 Luzerner Festival.

She was given her first cello lessons by her father Yke Viersen, a cellist with the Koninklijk Concertgebouworkest. At the conservatory in Amsterdam, she started with Jean Decroos and later Dmitri Ferschtman as her teachers. She finished her studies in 1997 as a pupil of Heinrich Schiff at the Mozarteum in Salzburg. Varied concerts with the biggest Dutch orchestras as well as with major international orchestras laid the foundations for the development of her musical personality and career, turning Quirine Viersen into a soloist in great demand.

Since its foundation in 1982, the Combattimento Consort Amsterdam has performed music composed between 1600 and 1800 under its artistic director Jan Willem de Vriend. The ensemble does not limit itself to performances of famous works but also searches continually for unknown masterpieces, these being frequently performed from manuscript sources. The ensemble often performs in large concert halls in a relatively small number of musicians. It performs not only in the Netherlands but also in Central Europe, Spain, Italy, Denmark, Germany, North and South America and Japan. The ensemble is a regular guest in Holland’s greatest concert halls as well as in smaller locations and also for private functions.