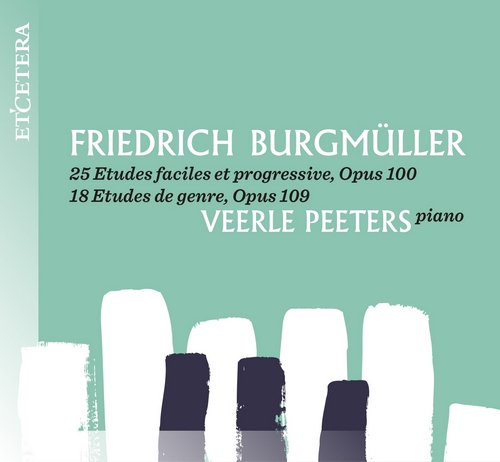 Etcetera - KTC 1761
Kompozytor
Friedrich Burgmuller (1806-74)
Wykonawcy
Veerle Peeters, piano
25 Etudes faciles et progressive, Opus 100
18 Etudes de genre, Opus 109
It is quite possible that Friedrich Burgmüller (1806 - 1874) wrote his etudes in imitation of Chopin’s fiendishly difficult but wonderful works. An experienced teacher resident in Paris, he would have rightly noticed that there was a scarcity of music that would be of interest to beginning pianists the etudes by Czerny, Cramer or Pozzoli are useful but one-sided, both technically and musically. It was a stroke of genius on his part to fill this gap with his op. 100 and 109, as these pieces cover just about the entire range of pianistic difficulties. La Candeur, in all its simplicity, is a fine exercise for the beginning pianist in legato playing, speed, harmony, musicality, phrasing, and tone weighting. The even better-known Arabesque etc., on the other hand, develops speed in both hands, wrist movement, wide leaps and independence of the hands. A student rarely has the impression that he is practicing a study, as all of these pieces contain musical challenges that parallel their technical difficulties. The atmospheric titles Burgmüller provided for these works make his intentions even clearer: their musical aspect is at least as important, if not more so, than the purely technical. Jan Vermeulen and I stated in the preface to our book Pianospelen that we believe that piano technique has no sense if it does not start from the musical story you want to tell and this is precisely why we attach such great importance to Burgmüller’s etudes: all the techniques we deal with are linked to musical interpretation and can be found in his pedagogical works.