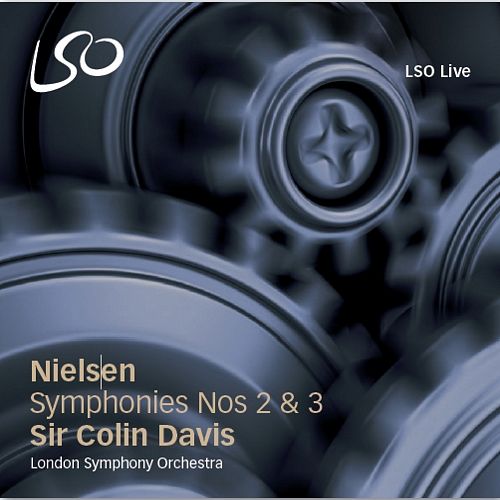 Sir Colin Davis completes his enlightening Nielsen Symphony cycle with the eagerly awaited Symphonies Nos 2 & 3. The first title in the series, Symphonies Nos 4 & 5, was Editor’s Choice in Gramophone and Orchestral Choice of the Month in BBC Music Magazine. Symphonies Nos 1 & 6 were awarded CD of the Week in the Sunday Times.

Nielsen’s Second Symphony was inspired by a naive but vivid painting representing the Four Temperaments of the human personality. Adopting these defining characters for each of the symphony’s movements Nielsen realised a sonic depiction of emotion. His Third Symphony, the most openly Danish of his symphonies, portrays spaciousness, power and vitality and is considered his greatest international achievement.

Sir Colin has recently been unable to fill his conducting engagements but he hopes to return to the podium in the new year, leading the LSO with Mozart’s Requiem in January 2013 and Schubert Symphony No 8 & Brahms Violin Concerto Op. 77 with Nicolai Znaider in March.

***** ‘The LSO displayed a strong sense of movement throughout, coaxed along by Sir Colin with an even and steady hand. The Allegro collerico first movement was spirited, even violent at points … The final movement, Allegro sanguineo, was a tour de force of the brass section, blasting away in wild abandon, totally cowing the strings.’ Bachtrack (UK)

‘Davis unleashed the opening allegro with an irresistible swing, fabulously played by the LSO, but he was sufficiently inside Nielsen’s symphonic imagination not to allow the more ruminative inner movements to be overwhelmed. It’s amazing to think that Davis has only recently come to the composer.’ The Guardian (UK)
DSD recording, live at the Barbican December 2011; Stereo and multi-channel 5.1