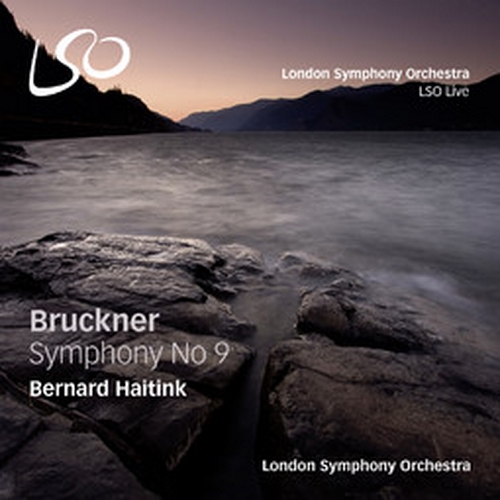 Album of the Week ‘Haitink, as ever, maintains a magisterial grasp on the architectural span of Bruckner’s final “cathedral in sound”. In his 85th year, he is the doyen of the world’s great Brucknerians. His latest interpretation of the Ninth is not to be missed.’ The Sunday Times (UK)

Bernard Haitink is internationally renowned for his interpretations of Bruckner and is widely recognised as the world’s leading Bruckner conductor.

Bruckner’s symphonies are often described as ‘Gothic cathedrals in sound,’ an apt description considering the composer’s devout faith and early vocation as an organist. He died before he could finish his Symphony No 9 but within its three movements can be found some of his most complete music, imbued with a sense of deep solace and resolution.

The orchestra plays well and there are many moments when everything really comes together. The conclusion of the first movement is as thrilling here as on any recording, the focused, penetrating sound of the timpani driving the music on. And in the Scherzo, Haitink demonstrates his rare ability to give the music drive and focus, but through accentuation rather than speed. The tempo here could seem perversely slow under other conductors, but Haitink is able to draw grandeur from this music, and without compromising the energy and feeling of momentum. Classical-CD-Reviews.com (UK)

Album of the Week ‘Haitink, as ever, maintains a magisterial grasp on the architectural span of Bruckner’s final “cathedral in sound”. In his 85th year, he is the doyen of the world’s great Brucknerians. His latest interpretation of the Ninth is not to be missed.’ The Sunday Times (UK)

****1 ‘This is an utterly compelling performance of Bruckner's valedictory symphony, and though one envies the audience who were lucky enough to attend these concerts, for those who didn't this fine LSO Live release is the next best thing. Unreservedly recommended.’ Sa-cd.net (UK)

'So, what does the live LSO and and the fantastic Bernard Haitink bring to one of our favourite works? Lots. Lots of inner counterpoint not always heard, lovely solos, fantastic ensemble, appropriate brass tone and the voicing of the massive chords that only a lifetime of Bruckner dedication can bring ... Highly recommended.' Audiophilia (Canada)

'... it is a recording that every admirer of Bruckner and world-class orchestral playing should hear.' Voix des Arts (US)

'The more I listen to this wonderful, spaciously recorded performance, the more I am getting from it.' Classical Source (UK)

**** ‘This experienced Brucknerian – after some half century of devotion to the composer – holds all in control, and brings a welcome lightness and gleam to the second movement Scherzo. The LSO plays with a transparency and poise that cuts through even the most climactic, brass-laden fortissimos.’ The Observer (UK)

**** ‘Haitink is a master of the design and the invention, and he and the LSO have a close rapport. Excellent recording, too.’ Classical Ear (UK)
Recorded live 17 and 21 February 2013 at the Barbican, London