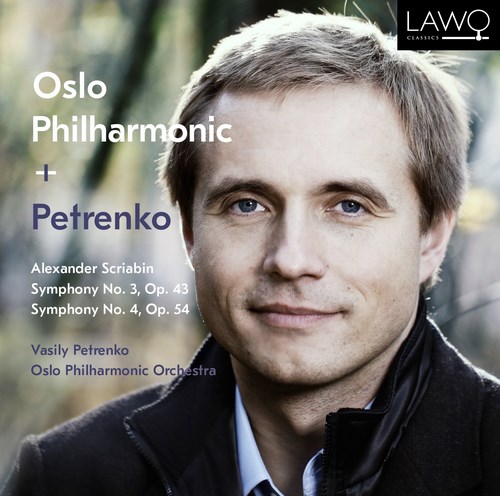 Symphony No. 3, Op. 43
Symphony No. 4, Op. 54
The Oslo Philharmonic is launching the first release in a series of the complete symphonies of Alexander Scriabin. The orchestra and its Chief Conductor, Vasily Petrenko, offer the captivating coupling of the Russian composer’s Symphony No. 3 ‘Divine Poem’ and Le Poeme de l'extase (‘The Poem of Ecstasy’), otherwise known as his Symphony No. 4. Both works were recorded in Oslo in February 2015. Orchestra and conductor will record Scriabin’s Symphony No. 2 in concert during the 2015-16 Season and complete the cycle the following season with the composer’s first and fifth symphonies.

The new album marks the start of a creative partnership between the Oslo Philharmonic and LAWO Classics. Alexander Scriabin’s deep immersion in esoteric philosophy and related spiritual awakening became integral to his art. The Russian composer’s initial conservative musical language evolved in the early 1900s and opened up to daring harmonic territories. His art was influenced in part by his reading of Helena Blavatsky’s The Secret Doctrine, a syncretic blend of ancient wisdom, occult practices, mysticism, and critical reactions to Darwin and modern ‘materialist’ science.

The Oslo Philharmonic, established in 1919, has achieved high international recognition for its artistry and has, since the 1980s, been in great demand as a touring and recording orchestra under Chief Conductors Mariss Jansons, André Previn, Jukka-Pekka Saraste, and, presently, Vasily Petrenko. With Petrenko the orchestra was invited to perform two concerts at BBC Proms in 2013 and ten Toshiba Grand Concerts in Japan in 2014.
Recording: Oslo Concert Hall (02/02/2015-02/07/2015)