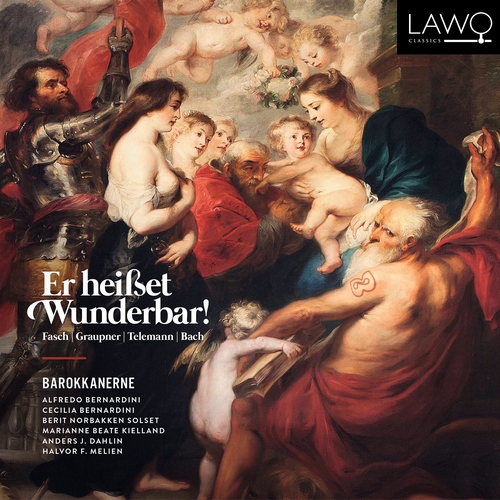 Johann Sebastian Bach:
Schwingt freudig euch empor, BWV 36
Christmas Oratorio, BWV 248/1 - Bereite dich, Zion (Alto)
Barokkanerne, under the direction of baroque oboist Alfredo Bernardini, rings in Christmas with German baroque music by a four-leaf clover of composers who vied for the post of cantor of St. Thomas Church in Leipzig – a position filled by J. S. Bach after candidates Telemann, Graupner and Fasch all declined for different reasons. The ensemble serves up Advent and Christmas cantatas by Graupner, Fasch and the great Bach himself, as well as a splendid Telemann concerto led by father and daughter Bernadini.

Barokkanerne are an Oslo-based Early Music ensemble and one of the very first independent professional baroque orchestras on period instruments in Scandinavia. The orchestra is Norway’s most active baroque ensemble with concert series in Oslo, concert tours in Norway and abroad, countless festival performances, and continual efforts to improve competence within Early Music among youth, students, amateurs and professionals. Previous releases on the LAWO Classics label, “Empfindsamkeit!” (LWC1038), “Totally Telemann” (LWC1074) and “Recordare Venezia” (LWC1114), have received glowing reviews at home and abroad.

Since 2009 Alfredo Bernardini has been a much beloved guest leader for Barokkanerne, and he can also be heard on two of the ensemble’s earlier releases, “Empfindsamkeit!” and “Totally Telemann”.

Cecilia Bernardini is widely considered to be one of the most versatile violinists of her generation and has won prizes on both the modern and the baroque violin.
Recorded in Orkesterprovesalen, The Norwegian National Opera & ballet, Sslo,