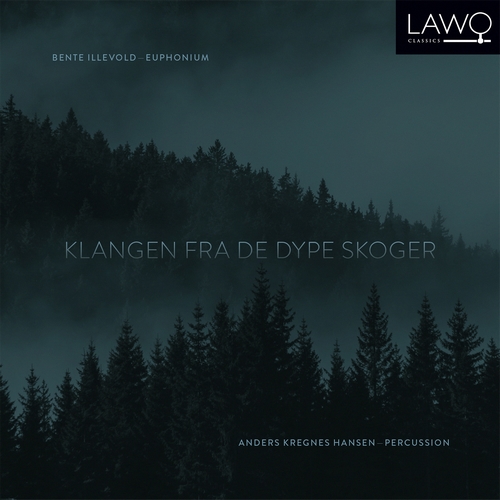 Bojrn Kruse:
Bom-bombardino for euphonium and percussion
"Klangen fra de dype skoger" (Sounds from the deep forests) is the sound of a human being who does not separate their identity from their music. It is a sound rooted in a simple upbringing with good values, in a society where time stands still…where, as a child, one can be one with nature and culture hour after hour – completely undisturbed.

Sounds from the deep forests is the sound of a divided human being, in the face of academic norms and demands, whose natural and spontaneous musicality drowns in the correct and restrained expression of the classical world.

Sounds from the deep forests is the sound of a human being rising again, where creativity, will, and faith win in the end, where identity and music are one, while the trivial instrumental barriers are breached and the boundaries only face resistance in their own boldness.

Sounds from the deep forests is musician Bente Illevold’s idea of expressing her own life, rooted in tradition, identity, and artistic innovation. Five composers have been challenged to channel the natural beauty and musical traditions of Rendalen, together with the seemingly mellow and measured character traits of Osterdalen, through new compositions for euphonium. The project contains, as of 2019, seven works, where the two largest are preserved on this recording.
Recorded in Jar Church, Baerum, 8-10 April 2019. Bente Illevold performs exclusively on Shires Q41 euphoniums.