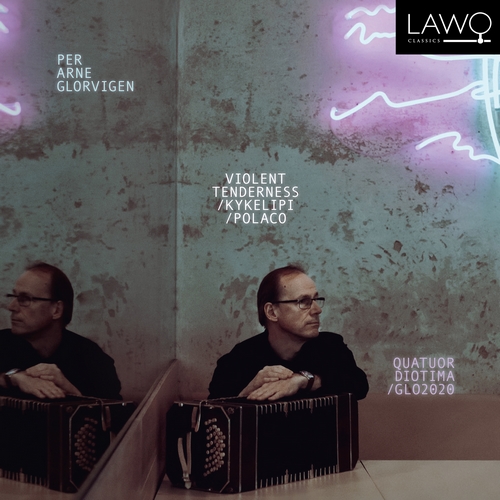 Violent Tenderness
Kykelipi
Polaco
"After having worked on several pieces for bandoneon and orchestra in recent years, I felt the urge to present some of my chamber music. All music featuring the bandoneon inevitably conjures up associations with tango, and yes, my music is no exception, most apparent here in my works for bandoneon and string quartet, Violent Tenderness and Polaco. In opposition to these two works it was important for me to find as much contrast within the ensemble and the works as possible. So I landed on piano, cello, baritone voice and bandoneon in my ensemble GLO2020, for the piece Kykelipi, with lyrics by Jan Erik Vold. My aim is to expand the repertoire of the bandoneon by bringing in new sources of inspiration such as French chansons, German ‘lieder’, soul, contemporary music, Norwegian lyric and folk music, and even the Polish national anthem. I’ve also brought in a new percussion instrument, the lurk. The desired result is to create something completely fresh where the listener can recognise the bandoneon sound and the tango rhythms but also be knocked out by the modern tonality, unpredictable chord combinations, the madness, humour, as well as some serious existential questions.

Since I’m known to often use somewhat dissonant intervals such as tritones and seconds, I jokingly call my music TANGST (a combination of the words tango and angst). This can easily be translated into other languages too, such as Tanguish (in English), Tangústia (in Spanish), Tangoisse (in French) and Tansia (in Italian). Let me stress though, that this music is Tangst con brio or Tangst giocoso!"

Per Arne Glorvigen
Recorded in Manoury Studios, Paris, 3 and 4 August 2020 (Violent Tenderness and Polaco) and in Sofienberg Church, Oslo, on 26 and 27 September 2020 (Kykelipi).