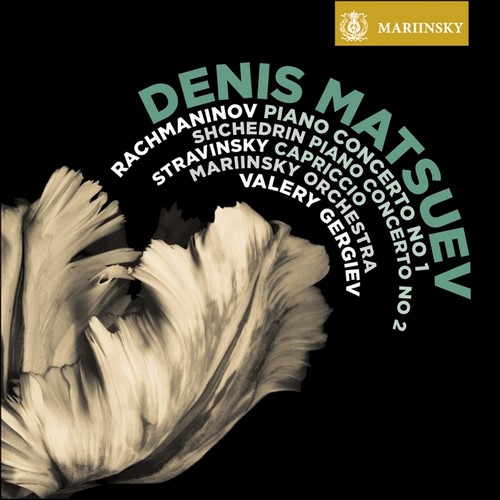 Stravinsky:
Capriccio
Denis Matsuev once more joins Valery Gergiev and the Mariinsky Orchestra for rumbustious live recordings of three 'greats' of the Russian piano concerto tradition. Rachmaninov's Concerto No 1 originally composed when he was a teenager exudes youthful panache; Stravinsky's Capriccio, in all but name his Piano Concerto No 2, fizzes with balletic movement; and Shchedrin's Concerto No 2 of 1966 is a fascinating work by one of the few composer-pianists still writing today.

Sergei Vasilievich Rachmaninov began writing his first piano concerto in 1890, as a seventeen-year-old student at the Moscow Conservatory. The work dragged on and was completed only in 1892, when in the space of two days he finished composing the second and third movements of the Concerto (and declared it Opus No 1). The composer dedicated it to Alexander Siloti, his professor of piano, and played as soloist at the Concerto’s first performance under the direction of Vasily Safonov, the director of the Moscow Conservatory at the time. Yet then Rachmaninov ‘did not play the work again until it was radically revised’ (quoted from a contemporary witness).

It is difficult to find a clear explanation for this, and it seems unlikely that the reason was that after the revision ‘the concerto felt easier to play’ (in Rachmaninov’s own words). It could be that under very trying circumstances the composer was searching for signs of a ‘lost time’ in his early works, and he turned these works into a source of spiritual support for himself. He did, after all, complete the revision of Concerto No 1 on 10 November 1917 three days after the October Revolution broke out in Russia. A month later, the composer went into exile and, judging by the second edition of the Concerto, he bade his compositional past farewell and prepared for new realities of life.

That being said, many features of his piano style remained unaltered: for example, the full-bodied chord textures, as found in the initial solo of the first movement (Vivace). In the same movement we notice an oriental colour in the incidental theme with its magical repetitions and the energetic, almost marching impulse of the rhythm pervades the entire piece. In the second movement (Andante) the French horns sound like pure Rachmaninov in the opening theme, and the broad melodic wave combines with fragrant harmonies that we find perhaps only in Rachmaninov’s late period. Finally, in the finale (Allegro vivace) the features of the late style come to the fore: by this we mean the parallel chords and floating chromatic background tones of the piano (especially in the Andante passage). As for the ending, or rather the dénouement of the Concerto, with its melodic proximity to the Catholic sequences in ‘Dies irae’ (‘Day of Wrath’), nothing can speak more clearly of the immutability of the ideas and moods of Rachmaninov the composer, for in his later works the motif from ‘Dies irae’ appears with striking regularity.

Does all this mean that Rachmaninov’s music has remained essentially free of an ‘Opus No 1’, insofar as on the big stage the second edition has superseded the first one? It can hardly be so, for the freshness of the youth’s composition is wonderfully preserved in that new version, which, as eyewitnesses reported, was finished by ‘the light of tallow candles’ during those final pre-revolutionary nights.

The forty-eight-year-old Igor Stravinsky wrote his Capriccio for piano and orchestra with a practical aim: to augment his concert repertoire. He may not have been a brilliant pianist, but he was a world-famous composer, and any new work by him (all the more so in the composer’s interpretation) was bound to attract wide interest. What was he saying through his new work? What could it offer the public? And would he be reinventing his creative persona, as he had already done many times?

Whereas his Concerto for piano and wind instruments (1924) was composed entirely in accordance with the Baroque style, in the Capriccio Stravinsky draws on instrumental styles from different epochs. Here we find Weber (who became something of a favourite for Stravinsky during the late 1920s) and Romanian live band restaurant music especially in the second movement. In other words, the Capriccio differs from the neo-classical opus on account of the ‘possession of a purely concerto tradition’ (as Stravinsky said in an interview) or the diversity of its movements and passages.

In this sense, the improvisational second movement of the Capriccio is particularly representative, with its cadence reminiscent of the sound of cymbals. Also interesting are the outer movements with their rapid alternation of solo, ensemble and orchestral passages. The variegation of the entire score is genuinely fascinating, its music is truly capricious Stravinsky had good reason to point out the root connection of the word with the name of this opus.

After the Capriccio in the chronology of the composer’s works comes the Symphony of Psalms one of the most sublime manifestations of his creative talent. In any case, gone are all traces of that entertaining quality or that ‘outer showiness’ (as Stravinsky called it), which was an attractive feature of his capriccio style. But the deed was done: the maestro’s piano repertoire had been enriched, public interest in his concert performances was boosted (the Capriccio even becoming the focal point for unexpected contact with prominent contemporary musicians such as Alban Berg, Josef Hofmann and Wilhelm Furtwängler). And, as happens only with the great composers, all their creations eventually become classics. Stravinsky’s Capriccio is no exception.

Rodion Konstantinovich Shchedrin wrote his Piano Concerto No 2 in 1966. The composer himself, who has to date authored six piano concertos, observed long ago that each of the works marked a particular creative achievement, and when the thirty-four-old Shchedrin wrote Concerto No 2, it served as a transition from his conventional early period, with its experiments in folk, to a period of lively interaction with the music of the European avant-garde.

The twenty-five-minute-long Concerto No 2 surprises and fascinates the listener with its high level of compositional freedom. It is not just the novel assortment of genres within the whole (the three movements are called ‘Dialogues’, ‘Improvisations’ and ‘Contrasts’), but also the arrangement of the material within the movements that is a far cry from the usual practice, though there is a classic dualism of form constantly making itself felt. The defining force is the varying rate of the rhythmic energy, the shifting density of the sonic fabric: this alone creates an unusual dramatic tension in each of the movements. In the ‘Dialogues’ the solo part is continually reinventing itself, while the orchestra seems to be searching for support within the clearly articulated theme. Add to this the tonal shimmering of the music, and all that remains is to extol the indefatigable ingenuity of Shchedrin in sculpting the first movement as a dialogue between the orchestra and soloist. The second movement ‘Improvisations’ has a prominent theme in the trumpet solo, but this theme is perpetually changing and, furthermore, the piano has some passages where the acoustic content is insignificant: all that matters is the distinct rhythmic contour (there is a composer’s comment to this effect). And then we have the glorious final movement: ‘Contrasts.’ Here Shchedrin takes up the idea of polystylistics, which matured in the music of the 1960s: in the middle of the loosely structured composition a jazz passage appears twice, written with captivating craftsmanship. There follows an overarching ascent, as in a classical concerto, culminating in accordance with tradition in a fiery-bright tutti.

The solo in Concerto No 2 is remarkable. At a time in Russian music when, following Prokofiev, the link between composers and concert performance was under threat, Shchedrin demonstrated the virtuosic appeal of piano playing, and without sacrificing in the slightest any novelty of its acoustic shape; on the contrary, he interpreted the piano as a universal instrument with the capacity seemingly to convey all the moods of modern life.

It only remains to say that the concerto has a laconic dedication: ‘To Maya Plisetskaya,’ and it was not the first major work that Shchedrin dedicated to her. Now that Plisetskaya has departed this life, we can once again marvel at the magnificent dancer and tremendous woman, who for more than fifty years was not only a wife to Rodion Shchedrin, but the preeminent, and perhaps sole, source of inspiration for his creative life.