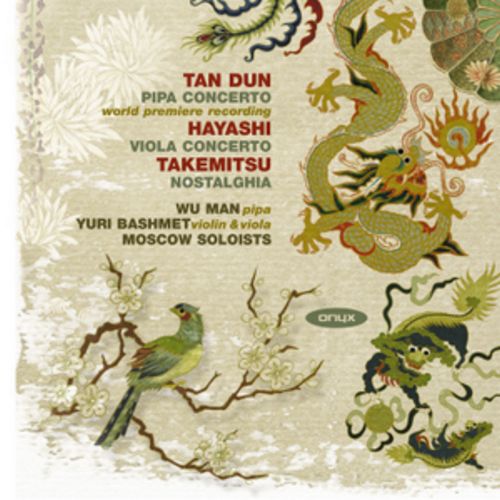 “Tan Dun’s four-movement Pipa Concerto...is, as one might expect, eclectic, vibrant, colourful and immediate; but, as with much of his work, the piece seems more theatrical effect than substance. Wu Man plays the pipa - a Chinese-style lute - beautifully. [In Hayashi's Viola Concerto] Yuri Bashmet gives the viola solo part with his usual powerfully rich tone, and he is equally good on the violin in Takemitsu’s Nostalghia (1988), a meditative tribute to the film director Andrei Tarkovsky. The Moscow Soloists, superb throughout, also give three extracts from Takemitsu’s large canon of film music.”

“This is the first recording of … Tan Dun's Pipa Concerto, and it's an absolute knockout. With strong, vigorous direction from Yuri Bashmet and some wonderfully extrovert playing from both the Moscow Strings and well known pipa exponent Wu Man, Tan's overt theatricality bursts forth like a rampant Chinese dragon. Bashmet is the soloist in both Nostalghia and Elegia, and it would be difficult to find a better advocate for these works.”