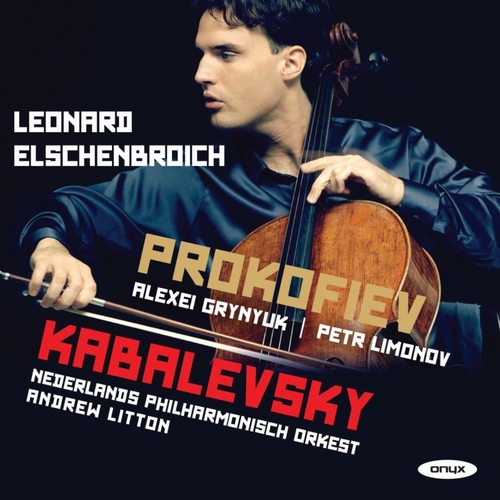 Kabalevsky:
Novelette
Cello Concerto No.2
Leonard Elschenbroich’s debut ONYX disc of sonatas by Rachmaninov & Shostakovich was greeted with universal praise by critics worldwide. ‘Exceptional’ said the Guardian awarding it the maximum 5 stars. The Daily Telegraph also awarded it 5 stars saying ‘There is an intensely inward, deeply communicative quality to this performance that draws you right to its tragic, pensive core’

Elschenboroich for his second ONYX release gives a blistering performance of the little known 2nd Cello Concerto of Kabalevsky with the Netherlands Philharmonic Orchestra under Andrew Litton. Recorded live in the Concertgebouw, it reveals this powerful concerto to be a neglected masterpiece worthy of a regular place in the repertoire. Prokofiev’s late Cello Sonata composed for Rostropovich in 1949, a difficult time for the composer. In failing health and accused by Stalin’s thuggish henchman Zhdanov of committing ‘formalist crimes’ against the Soviet people, his works were banned. Rostropovich and Sviatoslav Richter supported Prokofiev through this nightmare, giving the premiere in early 1950.