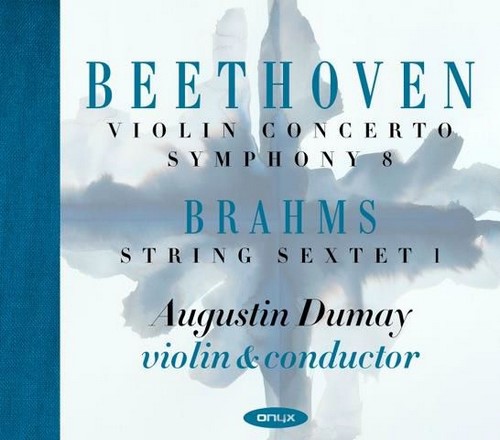 Brahms:
String Sextet No. 1 in B flat major, Op. 18 - Augustin Dumay, Miguela da Silva, Svetlin Roussev, Henri Demarquette, Marie Chilemme, Aurelien Pascal (sextet)
Augustin Dumay, one of the great exemplars of the Franco-Belgian school of violinists (Ysaye, Vieuxtemps, Wienawski, Grumiaux) appears on his new recording as soloist and conductor in a concerto that is contemporaneous with the foundation of what would become known as the Franco-Belgian school. Viotti would play an early and important role in this movement, and his influence can be heard in Beethoven's great D major concerto of 1806 (he had started a violin concerto in C over the years 1790-2, and the opening movement survives in a fragmentary state, which has been completed by Willy Hess and recorded by Gidon Kremer) which after a less than successful premier and years of neglect was championed by Joachim in the 1850s, is now rightly considered one of the greatest concertos for the violin. Distinctly chamber like in mood, the solo part is extremely challenging and exposed, with nowhere to hide for the soloist, and with no overtly flashy displays of virtuosity.

The concerto is partnered with Beethoven's compact, extrovert and high spirited 8th Symphony of 1812. Less well received at its premier than is companion of the same year, the A major 7th Symphony, Beethoven spoke of his affection for the 8th, and the music captures his boisterous humour, especially in the closing minutes of the work.

The second CD is devoted to a third facet of Dumay's artistry - chamber music. Brahms' first String Sextet sees him joined by young musician friends. Brahms commenced his chamber music for strings not with a quartet which would have invited comparison with Beethoven (his 9 Symphonies cast a long shadow over the younger composer, who waited until 1868 before composing his first symphony), but with a sextet. The darker sounds of the additional instruments provided a richer darker sonority that suited Brahms' complex and rich contrapuntal and tonal palate. The work's premier was led by Joseph Joachim, the champion of Beethoven's concerto, and a lifelong friend of Brahms