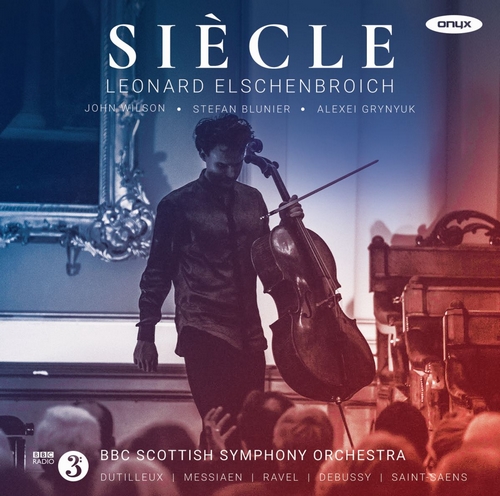 Messiaen:
‘Louange’ from Quartet for the end of Time

Ravel:
Habanera
A century of French music for cello is the focus of a fascinating programme from Leonard Elschenbroich. The two cello concertos on this album, composed 100 years apart frame Debussy’s late cello sonata, Ravel’s Habanera and movement 5 of Messiaen’s Quartet for the End of Time. These compositions span years of the Franco-Prussian War, the First and Second World wars, and into the 1970s. A whole distant world.

Leonard Elschenbroich is one of today’s most exciting cellists, and his ONYX recordings have been praised by critics:

‘This is a quite exceptional performance of Rachmaninov’s Cello Sonata. There are a good many versions already in the catalogue but this one by the young cellist Leonard Elschenbroich and Ukrainian-born pianist Alexie Grynyuk breathes virile new life into the music. I can’t imagine how many times I have heard the Rachmaninov Sonata, but rarely with such tingling sensation that its dramatic trajectory has been charted with such consummate perception, that its passions – whether demonstrative or introspective – have been so warmly embraced or that its heart has been so intuitively struck’ Gramophone review of ONYX4116.

‘there’s no mistaking the intensity and commitment that Elschenbroich and pianist Alexei Grynyuk bring to it, and the closing pages, which look unflinchingly towards extinction, are unnerving in the extreme. Its companion piece, radically different, is Rachmaninov’s Cello Sonata, in which Grynyuk’s energy and Elschenbroich’s sense of poetry are joyously to the fore. Exceptional.’ Guardian review ONYX4116

‘it is a long time since I have heard it played with such captivating freshness as here by the young German cellist Leonard Elschenbroich and the Ukrainian-born pianist Alexei Grynyuk. They both feel and convey the musical idiom instinctively. Daily Telegraph CD of the Week ONYX4116