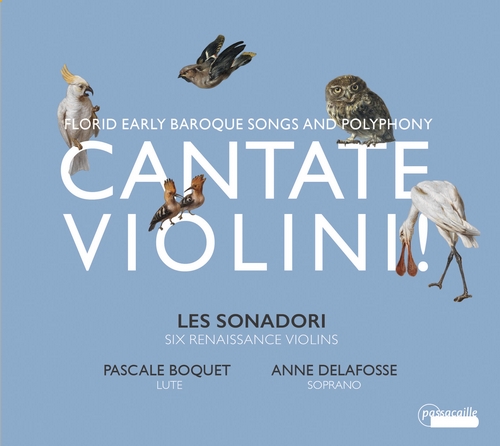 Claude Le Jeune:
Susanne un jour
The most beautiful polyphonic canzoni, chansons, motets and madrigals, were used like today’s pop standards in the 16th century; musicians would improvise on them, tailoring their playing and imagination to each other.

The colourful and varied selection of works on this recording is made up of different combinations of voices and instruments. A special aspect, a kind of renaissance violin band stands at the centre of this project: ensembles of violins were generally used to accompany certain moments in the Mass, at banquets, receptions, princely entertainments, entries into cities and palaces, diplomatic negotiations and sacred and secular processions as well as the long hours of dancing that followed the evening meal in northern Italy from the 1530s onwards, until the 1580s and 1590s announced the arrival of the new baroque style.

The word Sonadori, the name of the ensemble, is Venetian in origin; the Scuole Grandi or confraternities there employed full-time ensembles of singers and musicians. The confraternity of San Rocco was the first to replace the older instruments such as the fiddle, harp and lute with sonadori nuovi – new players – of the violin in 1531
Recorded in the church of Saint Remi, Franc-Waret (Belgium), August 2018.