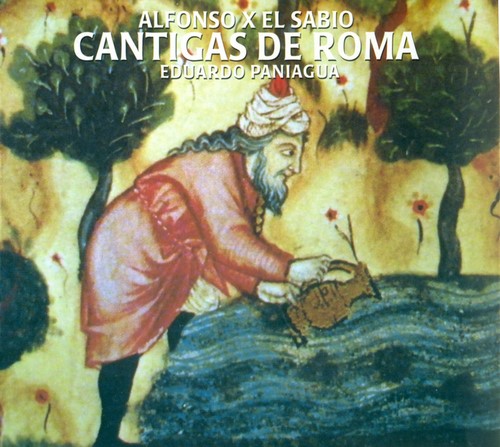 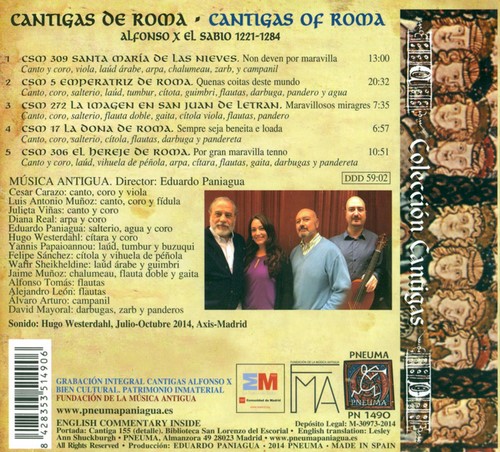 Pneuma presents the Cantigas of Rome within the framework of the project to record a retrospective of the entire collection of the Cantigas de Alfonso X. This recording is more specifically part of the collection of miracles that occur in the eastern Mediterranean, and complements CD PN 880 Cantigas of Byzantium and the CDs currently in preparation: Cantigas of Alexandria and Cantigas of Jerusalem. Rome’s relationship with the Byzantine Empire and with the wise hermits and Sufis of the Orient, make these miracles real travel novels packed with mystic teaching. The miracles of Rome complete those located on Italian soil and already recorded on PN-510 – Cantigas of Italy. They link the kingdom of Castile with the Crown of the Empire to which King Alfonso X aspired from 1256 onwards, at the proposal of the ambassadors of Pisa. Pope Gregory X, urged him to give up the idea of the Empire in 1275, but Alfonso X continued using the title King of the Romans until 1281.

All the cantigas in Pneuma’s complete anthology are sung with their text in its entirety, which is challenging, as some are very long with a simple and repetitive melody. Therefore, without knowing how they were performed at the court of the wise king, different devices have been used to make each song unique. The singing is backed up by the chorus, sometimes enhancing it with13th century style polyphony: canon where the words have been moved and the melody is mirrored on the main note of the scale or mode; recited narrative or dialogue, very common in poems; and the tones and textures of the instruments drawn so profusely in the miniatures that appear in the codices of the cantigas.

This is number 15 in the Florence Codex and has 14 stanzas. It tells the story of how the church of Our Lady of the Snows was founded, the first church dedicated to Holy Mary in Rome. The events took place on 5th August in the year 352 under Pope Liberius, when Constans, son of Constantine the Great, was emperor. The Alfonsine version sets the wondrous occurrence on the feast of the Assumption on 15th August, an auspicious date in the Marian miracles. The cantiga tells how the Pope and the emperor had the same vision on the same night. Holy Mary orders them to build her church in Rome on the spot where snow falls in the middle of the month of August. This they do, and they buy the plot of land where the snow fell and then collect donations to build the church today known as Santa Maria Maggiore.

This is number 15 in the Codex of El Escorial and number 19 in the Toledo Codex. In this song with 26 stanzas and 159 lines in long metre, Holy Mary helps Beatriz, empress of Rome, to escape the suffering and injustice to which she is submitted after defending her chastity and marital fidelity. It is a blend between a medieval novel and an epic feminine chant. The content is included in many versions and circulated in many variations from the 8th century onwards: Vincent de Beauvais, Etienne de Bourbon, and Gautier de Coincy, among others.

This is the story of the miracle of the Virgin Mary in the church of St. John Lateran in Rome. A woman went to confess her many sins, which according to her confessor where unpardonable. He told her ironically that the image of the Virgin painted on a wall would have to move to another wall for him to forgive her. The desperate woman did not stop crying in front of the image when, to the confessor’s surprise, he realized that the image had moved. Repentant, he asked the woman for forgiveness, telling everybody about the miracle.

Holy Mary saves a pious woman accused by the devil of incest and infanticide. She had been widowed and she consoled herself with her son, by whom she eventually became pregnant. When her new son was born she killed him in secret. The devil, appearing in the guise of a wise man, accused her before the emperor but on the day of the actual trial Holy Mary changed his face back and so the devil’s accusation did not prosper.

Cantiga number 20 in the Florence Codex. Painted on a walI in the church of St. John Lateran, there was an image of the Virgin Mary with the Angel of the Annunciation. The artist had painted her with a belt fastened above her belly making it obvious she was pregnant. A heretic commented that being a virgin she could not be pregnant. At that moment, the belt in the painting dropped to the image’s waist, in the way a woman would wear it before conception. The man asked for forgiveness crying before the image of the Virgin. The painting stayed like that forever.